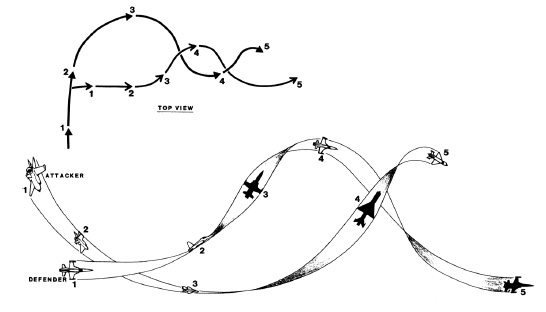 Angle-off, range and aspect angle are terms used in BFM discussions to describe the relative advantage or disadvantage that one aircraft has in realtion to another

Angle-off is the difference measured in degrees, between your heading and the bandit's. This angle provides information about the relative fuselage alignment between the pilot's jet and the bandit's.
For example, if the angle-off between you and a bandit were 0°, you would be on a parallel heading with the bandit and the two fuselages would be aligned. 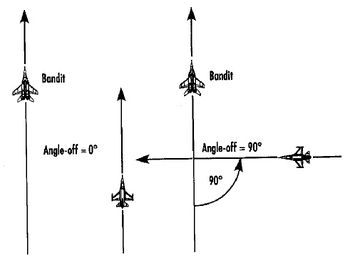 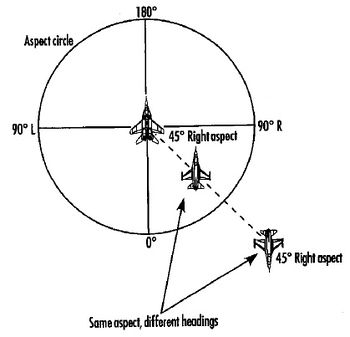 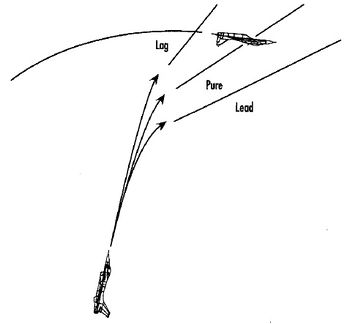 Lag pursuit is used primarly on the approach to the bandit. Lag is also used any time an attacking fighter maneuvers out of plane (not in the same plane of motion as the fighter under attack)
You must have the ability to out-turn the bandit in order to fly lag pursuit for any length of time. The reason ?
In order to shoot a missile or the gun at the ennemy, you must pull your nose out of lag. If the bandit can turn at a higher rate, he can keep your nose stuck in lag and keep you from shooting him.

Pure pursuit is used to shoot missiles at the enemy. Flying a pure pursuit course all the way into the bandit will lead to an overshoot.
For this reason, you should only point at the bandit when you are going to shoot. 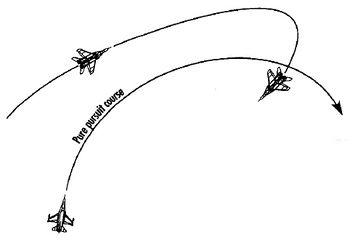 Lead pursuit is used to close on the bandit and is also used for gun shots. Flying a lead pursuit course if the fatest way to get to the bandit because you cut him off in the sky. The problem with establishing a lead pursuit course too early is that you will overshoot the bandit when you get in close unless you have a significant turn rate advantage.
If you're fighting a similar aircraft, such as the Mig29, you will not normally be able to stay in lead and will be forced into an overshoot.
It is important however to establish lead pursuit at the proper time in the fight because it is the only way that you can get into the gun envelope.

The goal of offensive BFM is to kill the bandit in the minimum amount of time. In order to accomplish this goal you must understand basic offensive maneuvering.
In order to stay in weapons parameters and in control of the bandit, you must stay at his 6 o'clock position. To do this you must maintain control of angle-off, range and aspect angle.
When your adversary will turn to go defensive an immediate turn will not work. You will have to know how to turn and when to turn.

Power for position is a concept that is an integral part of BFM. Fighters have two types of energy : Kinetic and potential.

You can also exchange energy for nose position. Anytime you maneuver or turn a fighter, it "costs" energy. When you turn in a jet at high G, you "spend" or lose energy. That's the bad news. The good news is that the defensive fighter also gives up energy to turn and defend himself.

The first two characteristics of turns are turn radius and turn rate.

Turn rate is the second important factor for turning the jet. Turn rate indicates how fast the aircraft moves around the turn radius or circle we just talked about.
It is also described as how fast an aircraft can change is nose position. Turn rate is measured in degrees per second and is also dependant on Gs and airspeed.
The higher the G in the above equation, the faster the turn rate. Velocity still remains an important factor. Notice that G is divided by velocity. If G remains at maximum, a higher velocity will cause turn rate to decrease. The reverse is true: a lower velocity will yield a higher turn rate. 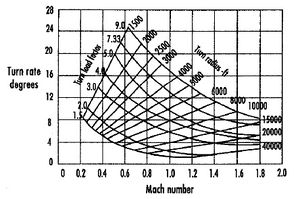 You may think that slowing down to minimum airspeed and pulling as hard as you can is the best course of action in order to achieve a high turn rate. Not so fast ...
There is a relationship between airspeed and Gs. at lower airspeeds, you have less G available. Less lift is produced by the wings of your aircraft at slower speed and as a result there is less force available to turn the aircraft. If you get going really fast (above Mach 1) you also lose G availability.
For every fighter there is an optimum airspeed for achieving the hightest turn rate. The airspeed where the jet has the quickest turn rate with the smaller turn radius is called corner speed.
In most modern fighters it is between 400 to 500 kts. The F16 has a corner velocity of about 450 kt (CAS)


The airspeed of a jet can be controlled by the pilot in the following four ways:

Don't forget G force causes airspeed to bleed off. No modern fighter flying at medium altitude can stay at corner velocity while pulling max Gs for long. As you pull Gs, you will get slower. It is important however to start maneuvering close to corner velocity because the first turn you make is usually the most important in the fight.

Fighter pilots should think in terms of both turn rate and turn radius. A fighter with a superior turn rate can outmaneuver a fighter that as a poor turn rate but a tighter turn radius.
Fighter pilots have a simple two-words saying: "Rate kills". What this means is that the ability to move (or rate) your nose is the primary means of employing weapons (which is what offensive BFM is all about)
A Bandit may have a tight turn circle but if you can rate your nose on him and shoot the fight is over.

Let's have a look at the F16 turn performances diagram on the right.

A bandit show up at your 6 o'clock. What do you do ?
If he fires a missile, fight the missile ! But before a missile is fired, you must turn and create problems for the bandit. The defensive turn should be the quickest, tightest turn you can make.
In order to get the quickest, tightest turn, you must be at corner velocity. As you start a defensive turn into the bandit, you should place your lift vector directly on him. This will give the bandit the most angle-off and aspect problems to solve. You will also deny him turning room by keeping your lift vector directly on his jet.

Bandit outside your turn circle

So you have rolled your jet to place your lift vector right on the bandit and executed your best high-G turn at corner speed.
Now you must determine if your defensive turn is working.
If the bandit is being forced forward from 6 o'clock toward your 3 or 9 o'clock position then the turn is working.
A bandit that starts outside your turn circle will be forced in front of your 3/9 line if you perform the defensive turn correctly.
Your turn is working if you push a bandit forward towards your nose. Keep in mind that he can still shoot you ! If the bandit has his nose in lead as you drive him forward with your defensive turn, be ready to defend against a gun shoot.
Remember, in order for him to take a gun shot, he needs to meet three conditions:

If the bandit's nose is in lead pursuit, watch out ! Even though he will overshoot, the bandit will probably attempt a gun shoot at the pass.
To defend against this type of gun shot, all you have to do his break suddenly out of plane. Because of the high line of sight rates involved, the bandit will not be able to correct in time and will overshoot.

Bandit inside your turn circle

What if the bandit is really close (1 Nm) Your reaction should be the same.
Put your best defensive turn on the bandit and see what he does. When a bandit starts close to your turn circle he is a serious threat, and your best defensive turn may not force him forward.
The bandit has one good option if he is committed to staying around and killing you: He has to fly lag pursuit to get your turn circle entry window.
When a bandit starts inside your turn circle and drives to lag, you are in for a long day. The best course of action is to continue your high-G turn and try to stick his nose in lag. 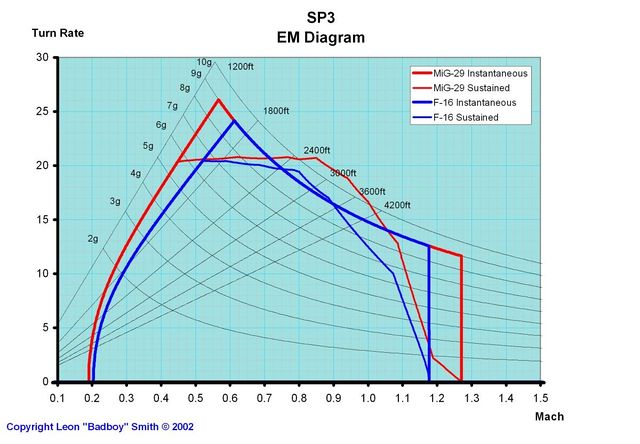