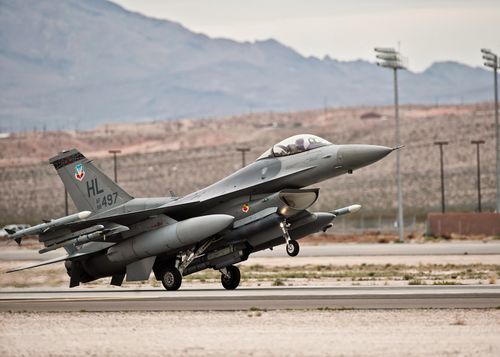 We do most takeoffs from the Taxiway position. When “takeoff taxi” is called, click the Takeoff button on the 2D screen and select Taxiway.

Lead always takes downwind side of the runway. The correct visual cue for a wingman to line up on his lead is to align his head with the main gear of the aircraft preceding him.

Once rolling, aim for the centreline, except for formation takeoffs.

When lined up, turn breaks on, throttle up to 80-ish percent throttle, release the brakes, and then go full afterburner (Gate). The element leader will be calling out and counting down to each action, ensuring a coordinated takeoff.

A rolling takeoff is the most time efficient way to get lots of planes into the air quickly. It's usually performed when the flight is late getting to its TOT and there is no time left for proper line up. Wingmen are cleared to take the active when the aircraft in front of them starts its takeoff roll.

RAT is an IFR departure. Single ship takeoff with 20 second spacing. Each flight member will lock the aircraft directly in front of him on FCR, call "TIED", and fly in trail. The overriding priority must be flying the aircraft, not operating the radar.

Radar setting should be RWS 60° scan, Range 10Nm, elevation slightly above horizon (threat volume lowered). No need to call buddy spike/lock when tied calls have been made.

RAT departures are performed at full military power and speed is limited to 300kts in IFR. Rejoins in formation happens at the exit point, usually on top of the weather where visual is again possible.

After taking off initiate a 10 degree climb and check towards steerpoint 2. Turn the afterburner off at 350 knots. Rejoin should be completed before starting climb to en route altitude. Lead will maintain 5000ft at 350Kts until the flight is formed.

For efficient climbs in the F-16: set mil power, reference the entry for your drag index. Pitch to hold the indicated airspeed for in the climb until reaching that mach number, and then pitch to hold the mach throughout the climb. 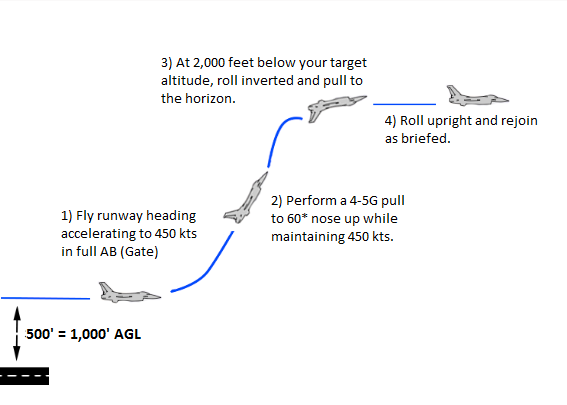 To execute a combat departure, begin the take-off as before (Buster to 100 kts, then Gate) then once airborne fly runway heading while accelerating to 450 KCAS in full afterburner maintaining 1000' AGL (or as briefed), then pitch up 60° using no more than 4-5G. Hold that attitude until within 2,000 feet of your clearance altitude, at which point you roll inverted, pull back down to the horizon before turning back upright at your clearance altitude and setting RPM as needed to maintain airspeed and altitude.

The fence check is the final preparation for taking your aircraft into combat.

The flight leader will call “Flight fence in”, at which point you should turn Master Arm switch to ARM, turn your exterior lights off (at night you should leave the anti collision light on), and ensure any weapons that require it are powered on (Mavericks and HARMs, for example).

Confirm the Fence in call by reading off the first three numbers on your fuel gauge.