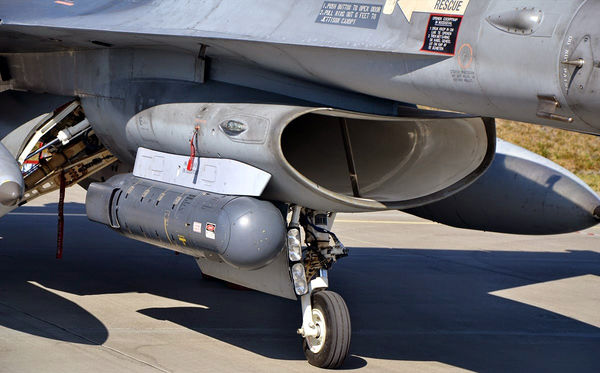 The TGP A-A mode provides visual target identification and tracking of A-A targets. In A-A the TGP is initially commanded to the FCR LOS if the FCR is tracking an A-A target. If the TGP is not the SOI (Sensor of Interest) and the FCR is not tracking a target, the TGP LOS is positioned to 0 degrees azimuth and –3 degrees elevation. The TGP can track and maintain an A-A target independent of the FCR LOS, resulting in two A-A TD (target designator) boxes/TLL's (target locator lines) on the HUD. Once the TGP has been commanded to track, the TGP LOS and the FCR LOS are independent. The TGP LOS is shown as a dotted 50-mr A-A TD box in the HUD. If the TGP LOS is outside the HUD field-of-view, a dotted TLL and target angle are displayed. 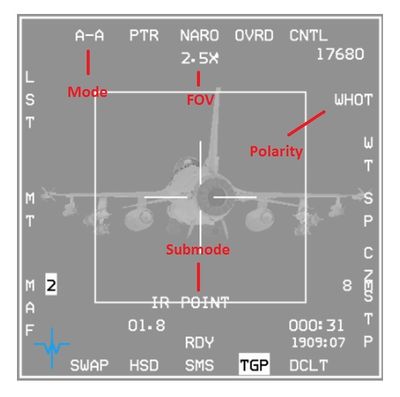 The ability to ID targets largely depends on one’s ability to recognize aircraft types. Once your target has been selected and the TGP is tracking, make sure your TGP zoom is set to NARO and 4.0x for better visual of your target at long distances.

In slave submode the TGP follows the System Point of Interest (SPI position). In A-A mode, the TGP is slaved to a bugged target or will centre just below the aircraft boresight.

POINT track mode tracks single objects with well-defined edges, e.g. vehicles, some buildings. When POINT Track is established a box grows from the center of the crosshairs until the edges of the target are enclosed by it. The TGP tracker continuously updates the tracker box such that, when the aircraft is maneuvered, the tracker box changes to the new viewing aspect of the target. POINT is displayed below the crosshairs, indicating that track has been established. If the TGP cannot maintain POINT track because LOS to the target is blocked (pod masked or target hidden behind another object for example) then the pod will drop POINT track and switch to INR; it will not return to POINT unless a new POINT Track command is initiated. TMS-aft commands the TGP to break track and return to the SLAVE mode, meaning it is slaved back to the radar LOS.

The TGP also has an Inertial Rates (INR) track mode. INR track is entered automatically when the pod cannot track the scene with POINT tracking mode. This happens most often when the aircraft structure or stores mask the target. When in INR track the POD LOS will usually drift slowly away from the target.