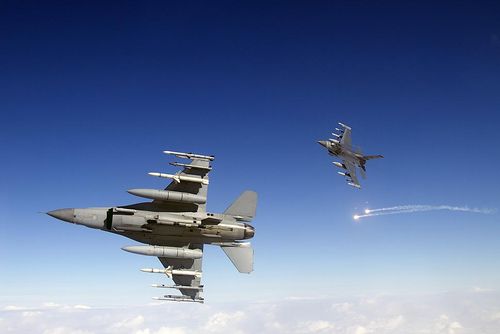 The F-16 is a pretty nimble aircraft. When not loaded with bombs or heavy ordnance, it can pull up to nine ‘G’ in a turn. When doing so, however, you bleed speed very rapidly, and you won’t be able to keep turning at that rate for very long.

When you need to turn rapidly for a long time (a sustained turn), especially if you’re in a turn fight with another fighter, you need to be aware of the F-16’s corner airspeed, as it’s at this speed that you can turn the fastest. If you go slower you won’t turn quickly enough, and if you’re faster your turn radius will increase. The corner airspeed of the F-16 is from 330 to 440 knots, or about Mach 0.80 when you’re above 10,000 feet. To perform a sustained turn, go full throttle, then pull hard enough to maintain the corner airspeed. If you start slowing down, ease up on the stick. If you start speeding up, pull a bit harder.

As long as you keep the corner speed in mind, the F-16 can out-turn almost every other aircraft in the game.