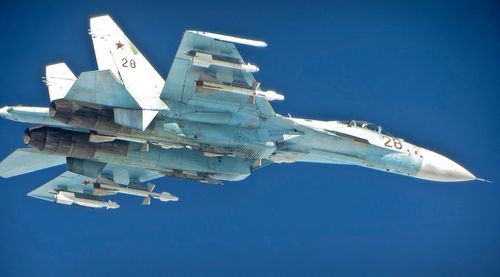 Put it out of range

Once a missile launch is discovered, you can simply run away from it by placing it on your 6'o'clock / Note this only works if the missile is fired at the edge of range (known as Rmax).

Countermeasures - is you detect a missile on RWR - its radar guided (the f-16 cannot detect passive IR launches like the A-10C). Put the missle on your beam (3/9 o'clock), punch a bunch of chaff/flares, and split-s. Every time you do this, the missile detects you Countermeasures as well as your plane and its up to the computer's interpretation of radar/IR data which one it will go for. Hopefully, not you...

Can be a last-ditch or if you carry your balls in a wheelbarrow. Once the missile is acquired visually (don't try this BVR), you once again want it on your 12-3 (or your 9-12) o'clock. as late as your dare,change plane (i.e. if its coming at you horizontally, go vertical or vice-versa). Unless its quite a new missile, it will not have enough energy to maintain the turn and will (hopefully) zoom right on by you.

Best results: do all of these ( or as many as situation dictates)

The SU-24 is a supersonic attack aircraft which can be easily confused for a MiG-23. It poses a significant threat as a SEAD, OCA and precision strike aircraft and is one of the few opfor aircraft to carry anti-radiation missiles (ARMs) effectively.

The SU-24 also carries AA-8 aphid missiles, heat guided short range missiles for self defense. They may also be carrying the AA-11 archer which is an extremely deadly heater. For these reasons you cannot treat a SU-24 like a SU-25, it is not a defenseless, slow moving hulk which can be gunned down with little threat posed to you. The SU-24 is nearly as manueverable as a MiG-23, can reach very high speeds and poses a threat in a circle fight. It is equipped with a gun. Kill them with missiles and don't try to be cocky.

The SU-17 is a ground attack aircraft which performs the same sort of duties as the SU-23 although is not as effective in the role. This is an earlier aircraft which is not as fast or maneuverable, but can still carry the AA-8 aphid and is more maneuverable than a SU-25 so should be respected. They are easy to confuse with MIG-21s due to the nose and fuselage design.

These are F-16s in the Egyptian Air Force (EAF). The main difference between the f-16 you are familiar with and these blocks is that they do not carry AIM-120 and will be using AIM7-m sparrow missiles. They also do not carry the AIM-9x and will be equipped with the AIM-9M and AIM-9P.

The AIM-7M sparrow is a missile most of you are not familiar with. It is what was used prior to the AIM-120 and is a fully semi-active missile with no active terminal phase. You will know you have been fired on if you hear a missile launch tone, but will not get a M on your RWR as with the AIM-120. If you kill the emitting aircraft, the missile becomes harmless. It's max range is about 30 miles (effective range 8-9 miles) and it can be defeated by performing the same procedures you would against an AA-10a alamo, 5-6 g sustained turn + chaff or split-s and drag. It is susceptible to chaff and aspect changes.

They are easy to identify visually versus Israeli jets due to their plain grey paint scheme. Although they do not have the AIM-120/AIM-9x, they are equivalent in capability and ordnance to a standard block 40 otherwise.