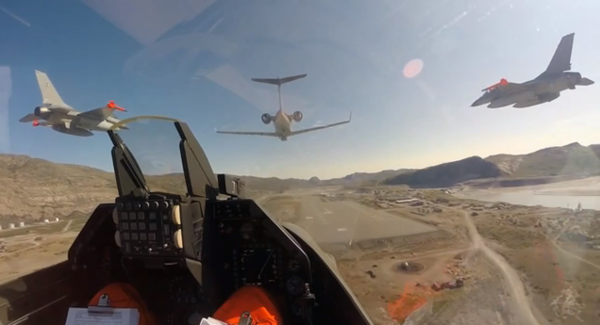 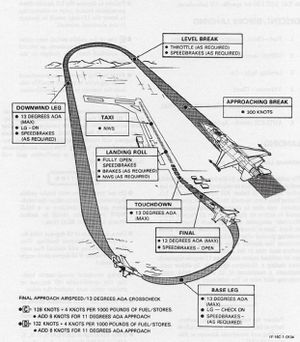 The military pattern, otherwise known as the overhead break, is the standard for all USAF fighter operations. It looks great on camera, but primarily, it's designed to deconflict and get planes on the ground as soon as possible.

The overhead break, otherwise known as the military pattern, is a landing technique used to accomplish the following objectives:

The military pattern is flown under several conditions:

A flight will assume close trail or echelon formation and will fly at 2,000 AGL until initial for the active runway at 300 knots. Aircraft will fly through initial to the "break zone," an area defined as the halfway point of the active runway. Aircraft will pull approximately 3G's at 70 degrees angle of bank until established on downwind. On downwind, aircraft will slow down to 200 knots minimum and configure for landing so that they arrive at the perch on speed . At the perch, aircraft will begin their base turn at approximately 45 degrees of bank, on AoA (flight path marker in bracket, usually around 150 knots), and intercept the glidepath of the runway at approximately 0.5 nm from the runway with the appropriate AoA. Aircraft will touchdown and land using the entirety of the runway. 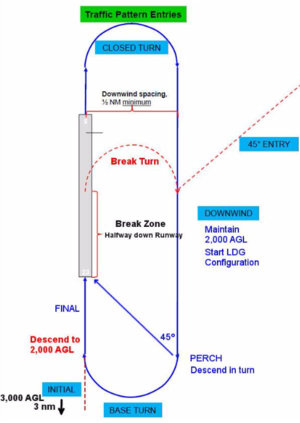 It is the flight leader’s responsibility to insure that landing procedures as they are stated here are followed with precision and purpose as well as to make proper radio calls to the flight and package comms.

It is the wingman’s responsibility to "be there." Do not hit #1, keep #1 in sight, be in position and on the proper radio frequency, clear for the formation, back up #1.

At the Break Point

On the Downwind Leg

The military pattern is designed with safety and efficiency in mind. When flown accurately, the overhead break in the military pattern should be a seamless exercise in formation and communication. As long as flights dictate their intentions and locations while maintaining proper procedures, collisions and safety hazards are minimal despite airspace that is densely populated with landing aircraft. 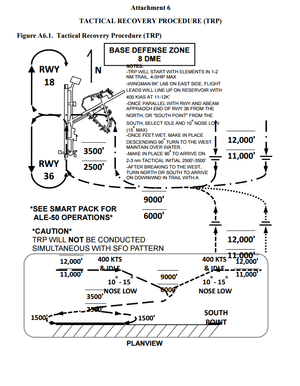 How to execute a TRP