If you are new to BMS, your first job is to setup your settings and controls and data cartridge. The controls are a series of bindings that you need before you can perform basic flight, the data cartridge is a program you load into BMS in order to have good functionality in your aircraft's avionics, including default configurations for your multi-function displays (MFDs). Without a data cartridge you will have to manually setup your avionics every time you fly, and when you press the countermeasures switch, which controls the deployment of chaff and flare, nothing will happen.

Make sure you having a working throttle and rudder. If you don't have a twist axis on your joystick, you can assign keys or joystick buttons to represent the rudder.

Controls you absolutely need to know, and (as far as possible) should bind to your joystick:

Binding to joystick can be done via profiling software, or via in-game/DirectX assignments. See this thread.

Beyond the normal pitch, roll, throttle, and rudder axes, if your joystick has extra wheels or sliders, it’s recommended to assign them to the Radar antenna elevation and Range knob under advanced control settings.

If you find your controllers are working weird, or you have lost some of your controls, check and change the order of your devices in Falcon BMS/User/Config/devicesorting.txt.

Here is an example; I had to move the Joystick and throttle ahead of the MFDs and the pedals had to be at the end for my controls to work properly.

The Thrustmaster Warthog is a replica of the HOTAS used in the A10-C aircraft. It is basicaly a F16 stick combined with a F15-E throttle.

The best way to configure BMS is to use the directX input. (this way you're keeping all the advantages of the F16 master modes (AA-AG-SRM as well as the short and long push functions etc)

You can use the HOTAS directly in game without any software using directX input but be advised that BMS will pick up the first 32 buttons of each controllers (32 buttons for the sticks and 32 for the throttle) due to a DirectX limitation and only ONE hat (the one from your primary input device that you have set in the CONTROLLER drop down menu). This means that if you have your joystick set as primary input device BMS will not recognize the hat of your throttle (coolie switch)

Anyway we can use a workaround using the Warthog software suite called TARGET. (There is two different version of TARGET. You can either use a GUI version or a more complicated but more powerfull Script version.)

Here what you should do:

There is several other good reasons to use the script editor. For example, you can use the LED lights of the throttle (i.e lights ON when master ARM ON etc ...) You may also manage axes with any kind of button (this way I'm using 2 buttons to move my antenna elevation like an axis) and you can also make some chains of command that gives you the ability to have multiple outputs by pressing a button once. (very useful for turning ON or OFF all the lights with one button only)

X52 Pro has customization MFDs among a couple other features. I have the regular and am fine with it but those with the Pro say it improves there experience by a lot

I refuse to buy an X-65 because it has no second trigger detent. That means you can't have the proper switchology to engage the TGP laser or ACMI recording in auto mode, and in DCS PAC doesn't work.

You could do some workarounds to fix these issues - for instance, designate a button or keypress for the first trigger detent in BMS and use that to trigger the TGP. I just find it highly annoying that saitek's top-end stick doesn't have something that is now common on sticks.

Otherwise, I've heard good things from the BMS crowd regarding the X-65's force sensing, it's apparently really enjoyable to fly.

A good set of rudder pedals with toe brakes can make your taxiing and your maneuvering even better.

Although this video refers to DCS A-10, it it one of the best for learning how to configure your Track-IR properly for you.

The purple lights coming from the LED's is Infrared light that is invisible to the naked eye. However, these LED's have a little red light indicating that they are powered.

All the wiring for the bottom two LED's is modular and is constrained in the tube.

Same kind of thing, the LED and wiring are constrained in the tube.

The whole thing is wired in parallel so if any of the LED's burn out (I have not had a single LED failure in 5 years), I know which one is the problem. Also, the parallel wiring allows me to put all the positives and negatives together when I connect it with the power supply, making it look cleaner than random wires everywhere in a series circuit.

You can use the TrackClip PRO with this. 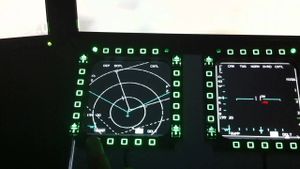 For extra buttons and added immersion, you can set up USB MFDs to interact with BMS. Couple this with some monitors and you have a cool experience.