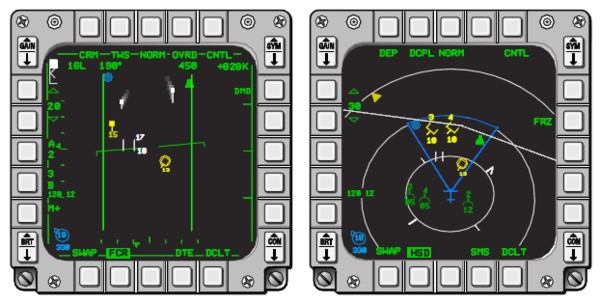 Video from Krause made with BMS 4.32

Datalink allows the flight lead and his wingmen increased situational awareness (SA), the ability to pass positional information about each jet in the flight to all flight members, to target flight members on to air-to-air or air-to-ground targets, to easily execute tactics that go beyond the visual arena and regain visual mutual support should a flight member become a “lost wingman”.
The DL system allows up to 8 IDM equipped aircraft to transmit and receive intraflight data link messages.

The Demand (DMD) and Assign (ASGN) data link modes allow a team member to obtain a “one-shot” team situational awareness update (an intraflight transmission round) on an “as needed” basis.
The DMD and ASGN modes also enable the option to make assignments to other flight members.
The messages transmitted allow each member to see the positions and headings of other members and their bugged target on the HSD page and FCR page
Beware : Both A-A Request and A-A Reply messages are snapshots in time. Reply messages are extrapolated for 8 seconds. Once this extrapolation period ends, the symbols will disappear.

The Continuous (CONT) mode allows the pilot to request continuous update of request and reply intraflight messages. This is the mode that also requires coordination amongst flight members if you are flying in the multiplayer environment, as only one aircraft needs to be in CONT mode and initiates the CONT data link round.

During mission planning/ mission building, when you are building a package of aircraft, the first flight (in this case a 4-ship) in a package will be assigned addresses 11-14. The next flight will be 21-24 and so on.
If during planning you adjust takeoff times so that, for example, the first flight you created takes off later than another flight in the package, the first flight you created will still use addresses 11-14.
This is important because your IDM addresses may be different than what you thought they were going to be.
If you were not familiar with the order in which the flights within the package were created. A good technique is to check the order of the flights in your package on the Briefing page in UI before you commit to 3D.
It will list them in order. This can help you select the right transmit addresses for other flight in your package (if there are several flights in the package and you want to monitor the location of any of those flights). 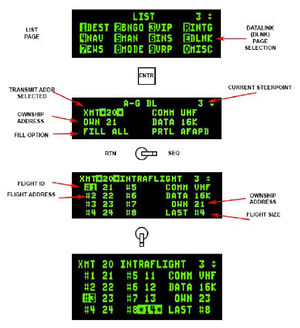 In order to effectively exchange information, each participating data link user must have compatible parameters initialized into his respective IDM terminal. In BMS, initialization parameters are automatically fed into the IDM – to an extent. Ownship team address numbers and other flight member team addresses are done for you. These addresses are for your (up to 4) intraflight members.
The additional team addresses 5-8 are not filled in and must be keyed in manually, based on the pilot’s needs or a package commander’s needs.
For example, you are 2-ship of DCA and the first flight of a package that has 4 flights in total. You are addresses 11-12; already in the left column. You decide that you want to maintain situational awareness primarily on the flight leads of the other flights. You can enter 21, 31, and 41 in the IDM and receive their positions on the HSD, or you can enter 2 of those addresses in the left column and also receive information on any radar contacts they lock up.

As seen in the picture on the right, LIST → ENTR gets the pilot to the A-G DL page.
The only two selectable options in this page are the Transmit Address (XMT) and the FILL option.
The FILL option determines whether the system stores (ALL) or ignores (NONE) all received data link steerpoints (71-80).

In most cases, FILL ALL is used. The FILL option has no impact on A-A intraflight or A-G cursor messages – they will be processed normally.
Sequencing right (SEQ) changes to the INTRAFLIGHT page, where up to 7 team addresses can be reviewed and changed (ownship address cannot be changed in BMS).

The following applies to making a data link A-A assignment:

Following screenshot are showing FCR, HSD and HUD of an Assignee (element lead in this example)

The A-G intraflight data link function allows the transmission of data associated with the currently selected steerpoint or the A-G radar cursor position which can then be used by flight members to “walk” their sensors (A-G radar cursors, TGP, etc.) onto a target or point of interest.

For example, the flight leader of four F-16s wants to data link a markpoint to all members of his flight and their addresses are 21 through 24, he would enter a transmit address of 20 in the XMT field and initiate data link transmission with SimCommsSwitchRight (Page Down). The data linked mark point would be displayed on the HSDs of all flight members in the intraflight link. Likewise, if his 4-ship is a part of a package of 8 aircraft and the other flight’s broadcast address was 10, he could enter 10 and transmit A-G data to the other flight of four.

A transmit address not ending in zero is directed to a single respective aircraft.

For example, if a pilot wanted to send a mark point to only his #3 wingman, and the wingman's team address is 23, the pilot would have to enter 23 (the wingman’s address) in the transmit address field on the AG Data Link page. When the pilot transmits the message only wingman #3 will receive the message and have the markpoint displayed on his HSD.

Entering in a specific transmit address is only for A-G operations and does not affect A-A intraflight data link.
Transmission of data to a single aircraft can be done to a member outside of your immediate 4-ship team. In other words, if you were address 21 and there was a flight of 4 with addresses 11-14 and you wanted to transmit a mark point to only the leader of that flight, you would enter 11 as the transmit address and initiate the data link transmission as above.

Alternatively, the pilot may select the steerpoint he wants to data link via the UFC (Up-Front Controls – ICP), switch the SOI to the HSD and then depress Comms switch right. Data link steerpoints shows up as a large X symbol on the HSD and are stored in steerpoints 71-80, which allows multiple DL steerpoints to be retained by the navigation system. Once they are all filled up, #71 will be overwritten and subsequent DL STPTs will overwrite the other numbers.

The A-G cursor function provides a hands-on transmission of A-G FCR cursor position. This function is available independent of system master mode while the FCR is in ground map (GM), ground moving target (GMT), or SEA modes and requires the FCR to be the sensor of interest (SOI) for transmission. It also provides A-G cursor data link reception independent of any data link mode.
Transmitting ownship A-G cursor coordinates is accomplished hands-on by making the FCR the SOI.

An audio tone is audible in the headset and the mnemonic XMT is highlighted for two seconds adjacent to OSB 6 on the HSD. The pilot will not see his own A-G cursor position data link symbol, which is a yellow asterisk (*) symbol (see Figure below).

Reception of A-G cursor data link message is independent of the current data link mode. Several cues are provided by the avionics system to indicate reception of a data link message. An audio tone is activated followed by the aural VMU message “DATA” in the headset and the HUD message, “CURSOR” and “DATA” in the middle of HUD.
This HUD message remains until the DRIFT C/O switch is positioned to WARN RESET on the ICP or the data is no longer valid (i.e. 13 seconds has elapsed since cursor reception).
After reception of an A-G cursor message, the HSD and/or FCR (if it is in one of the three ground-map modes – GM, GMT, SEA) displays the data linked A-G cursor symbol (*).
The symbol is displayed with an ID (1-4) which represents the message source (team member 1-4), or displayed as a 2-digit number representing the IDM address of another member of the 8-ship team that is not members 1-4). This symbol remains on screen for a total of 13 seconds and begins flashing during the last 5 seconds if it is within the display FOV.
Important notes :