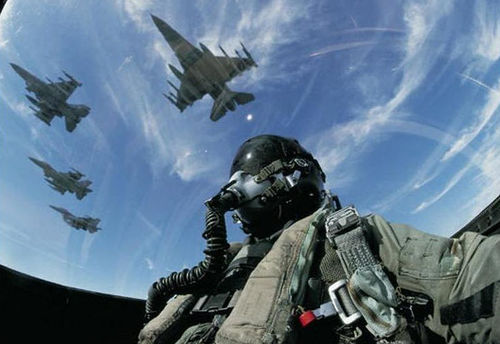 3) Element Leader - the second most senior pilot, he is 2nd in command of the flight and leads element 2. His jobs include keeping up situational awareness and supporting element 1. 4) Wingman, the least senior pilot

Your Job as a Wingman

The job of a wingman is to support the lead of an element and execute orders. The basic list of responsibilities is:

Some tips for staying in formation:

The only other thing I could think to cover are specific events that you might find yourself in and not be sure what to do. Here's some hints for a variety of situations.

Look at your RWR. Do you have anything? If so try to correspond the contact to the radar emitter. If not, is the target intercepting the flight or is it going really fast? It's probably enemy, monitor it for a few seconds and if it continues, give a bogey or outlaw call, and give a BRAA to it. You can also quickly refer the lead to it by using the assign feature of the datalink. DO NOT DECLARE THE CONTACT WITH AWACS, LET THE LEADS HANDLE THAT.

Someone starts shooting AAA at you

So you start seeing explosions all around you. If it's radar guided (see an A with a diamond on it on your RWR?) your only choice is to drop altitude rapidly, build up speed and burn out of it's range. If you go below 2000 feet ATL, it can't engage you, but you are also exposed to a myriad of dangers and potential enemy ground units. If it's optical guided, you may be able to simply gain altitude or jink in the vertical (changing altitude up and down) until you are out of its range. It will be unable to engage you above 30,000. In eithercase, give a defending AAA call.

An enemy scans you on the RWR

Give a nails call.

An enemy locks/tracks you on the RWR

First - if the enemy is in the outer ring of the RWR, stay calm. Report a spike, if it comes within the next ring, go defensive (quickly turn away from it and get it to your six) and give a defensive call. If the enemy is in the inner ring or close to the inner ring, you need to break away from it, burn and start looking for missiles or the contact visually while dropping a healthy serving of chaff and flare. If the enemy is very close, try to keep him on the beam if possible rather than directly at your six.

You're lost and don't know where you are

First, give a tumbleweed call. Next make sure you are safe - not about to die. Once you are relatively safe, go heads down, check your HSD and look for others on the datalink. Always flow toward the FLOT until you acquire friendlies. If you are lost because you lost your avionics from damage, trim out your plane and climb, look for landmarks and start relaying them. Use your instruments if they still work.

Make sure you go into the burn and try to gain as much altitude as possible, but not at the expense of speed. Going slow is a death sentence when merging on enemy.

You see a SAM/missile launch

First, consider if it's been fired at you. You'll know this because if its tracking onto you you will see it arcing toward you, and if its on a pure pursuit it will appear relatively motionless. At this point you should do a hard g break away from the missile, build up as much speed as possible by diving and employ countermeasures; give a engaged defensive call. The RWR is also a clear indicator that a SAM has been fired at you. Other SAMs are infrared guided and will NOT give a RWR warning. In this case the SAM will be tracking you if it flies directly toward you on a true pursuit (straight line). Drop flares and break away from the missile.

But what's more important for this overall topic is what you do if you see a SAM and it's NOT guiding on you. DO NOT JUST IGNORE IT - it's about to kill a friendly aircraft. First visually acquire your lead in relation to the missile. If you can't see the lead for whatever reason just watch the missile and it's projected path. Yell on guard, "SAM LAUNCH [direction]" such as "SAM LAUNCH WEST!". If you see the missile about to hit a friendly aircraft, give a break call in a direction which will likely kinetically defeat the missile. Also if someone calls a SAM launch or spike, you should look for launches immediately. This is arguably the most important job of a wingman.

First, check your master arm switch. It should be in the up position. If it's not, you just learned a lesson, which is always to put your master arm up when you fence in. If your master arm is good, you are probably outside of weapon release parameters and using the weapon wrong. For instance, to fire an aim-120 you must hold down the pickle button, not just tap it. In CCIP air to ground bombing, if there is a hash line on the fall line then it'll convert to CCRP if you pickle; there has to be no horizontal line going through the fall line for it to instantly come off the rack. etc.

You probably over-G'd or over-speed your airframe. The f-16 can pull 5 gs in category 3 conditions and 9 gs in category 1 conditions. A mistake of new people is to pull very hard on the stick when they are being threatened - but watch your G (displayed at the top left of the HUD). If you over g or over speed too much you can actually break your FLCS system which will make your aircraft difficult to control. Over speed conditions are 600 knots in cat 3 and 700+ knots in cat 1.

Category 1/3 can be changed by the cat 1/3 knob on the left side of the cockpit, to the left of the MFD. Cat 3 is intended for manuevering when the airframe has wing tanks or air to ground stores - cat 1 for when there is only air to air ordnance or a store on the centerline.

You keep getting killed trying to do air to ground attacks

First, when you go below 10,000 feet your chances of being killed increase by an order of magnitude. The maximum engagement altitude of self-propelled AAA and generation 1 manpads (like the SA-7 strela, the most common DPRK manpad) is 9,000. Certain systems such as the SA-13, SA-8, SA-16 and SA-9 can engage up to 15,000 feet.

Your main mistake is that you probably come in on a target with too much "slant range" - that is, you nose down too early and probably get to about 8,000 or 7,000 by the time of weapons release. It's better to ingress at higher altitude then pitch down sharply 40 degrees or so at 3-5 miles distance, then come off with the added speed well above 10,000. Circumstances vary of course - sometimes you can go down below 10,000 and strafe targets with your cannon at 3000 feet! That being said, you are too much of a noob to realize when situations such as that occur and should always stay above 10,000. When you hear "altitude, altitude" you should pull up and do another pass. Also, if you do for whatever reason pass below 12,000 - start popping flares.