The AIM-120 is the premier BVR missile of the Western world, it has seen use in the middle east and Balkans. Proving itself to be the most capable operationally used missile of all time. Over the course of its life it has recieved numerous upgrades that have all increased its lethality. The AIM-120 achieves this lethality in no small part due to the fact it is an active missile that has been made exceptionally small yet still has a very poweful motor. Being an active missile it has its own radar to hunt down targets allowing the firing aircraft to retreat the moment it launches. The latest variants of the 120 the D model have even added the ability to fire the missile on datalinked targets and at HOBS targets.

The B model AMRAAM was the second iteration of the AIM-120 series with an improved guidance section being the only upgrade over the A model. Externally and internally the two are essentially the same missile. As such the B offers a missile with good range, good maneuverability, and the immense advantage of a fire and forget missile.

The C-5 is an early 2000's variant of the AMRAAM. It differs from the B in that the fins of the missile were redesigned so they could fit into the weapon bays of the F-22 Raptor. This also has the side effect of offering reduced drag for slight loss in lift. In addition to this over the course of the C's development from C to C-3 to C-4. It has received new warheads, guidance sections, and an every increasingly more powerful and longer burning motor.

The Sidewinder is the longest serving missile series in the world. It has seen massive improvements over the more than 50 years it has been in service. The F16 can currently carry three types the AIM-9L, AIM-9M, and the AIM-9X

The '9L' was the first of the "unified" Sidewinder models, as previously the Airforce and Navy had their own unique model, this one was the first to be used by both branches. The L was a major upgrade over all previous sidewinders, heavily based on the AIM-9H the ultimate navy only variant. The L featured a new cooled InSb (Indium Antimonide) FM spin seeker which provides some natural resistance to IR counter measures, a completely new electronics package, increased off boresight capabilities, higher max G, higher launch g (7g's), much longer flight time of 1 minute, New warhead, new and more powerful motor.

The '9M' in shape, size, weight, and even appearance is the same missile. But on the inside its electronics got completely overhauled. These new electronics could now filter out flares based on a flares energy rise time. And be reprogrammed to keep it up to date with the latest threats. 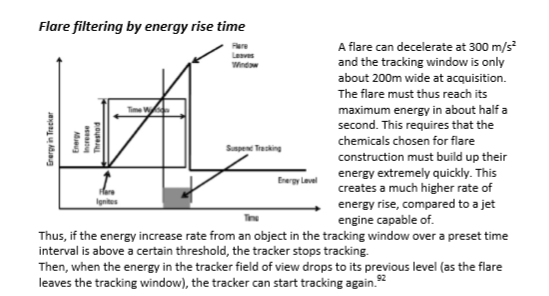 Filtering out flares by energy rise time, from "History of the Electro-Optical Guided Missiles"

The '9X' is a complete overhaul of the AIM-9 series doing away with the basic shape set back in the 1950's. This new design is sleeker, smaller, and capable of unmatched short range performance. The 9X got its start as a response to the revelation at the devastating capabilities that HOB's missiles, in particular the archer, provided in close in fights. Even though the 9M was superior to the archer in many ways the archer's HOBS capability scared the USAF and Navy into designing a response. Much in loo of the F15, the 9X completely surpassed all other designs both at the time and for the foreseeable future in maneuverability and electronics. Featuring a thrust vectoring motor system and a new body design the 9X is unmatched in its ability to turn. In addition to this the new FPA (Focal Plane Array) seeker the missile received came with a 90° off boresight capability surpassing the archers off boresight capability substantially. With the cherry on top being that the missile retained the same smokeless motor of the 9M making it next to impossible to detect visually. 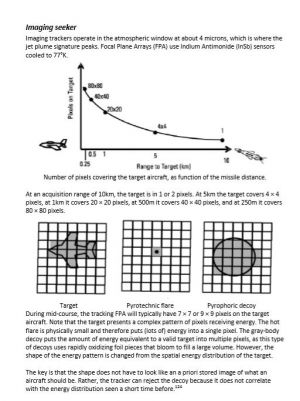 The 9X essentially gained an inherent immunity to pyrotechnic flares that is supplemented by CCM techniques such as filtering by energy rise time and apparent motion. Even to the newer grey body flares that would decoy even the Russian dual band seekers with high reliability have little effect on the 9x's seeker. Only the upcoming DIRCM technology really stood a chance at defeating the missile with countermeasures. The missile in DCS is the best short range missile in the game with unmatched maneuverability, range, and CCM performance for a missile of its class. On MP servers it is quite often the missile with the highest success rate. ---