I'm taking this to the forums so the knowledge does not get lost and it can easily be spread. I use these things everyday, and I'm telling you, there is no game out there that properly models the AGM-65 Maverick. It is an absolute sportsman's weapon, and they are very difficult to use. At long ranges it usually takes multiple lock attempts to lock up what you want. When you add shading, it makes it worse, because the MAV will bound on the shadow as part of its image and miss the target ever so slightly. As far as I'm aware, we are the only community left that actually uses the non-laser versions on a daily basis and actually has proficiency with them.

I'm not urging you to use the weapon in a realistic fashion, but I think by telling the truth about the weapon will help discourage bogus sim tactics that even in game, will lead to problems and people dying. This diagram should sum it up: 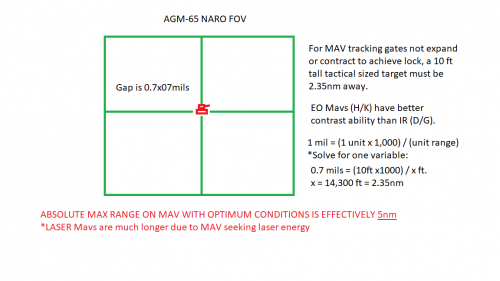 The launch transient phase of flight, which is right after motor ignition, is what really affects max range. Technically, the max range is limited to the battery life of the missile. This is what limits the Laser MAV's max range. For optical Mavs, it's the launch transiet. Basically the missile opens up its eyes during the violence of launching so as not to lose the target, but this risks binding on the wrong target after launch. 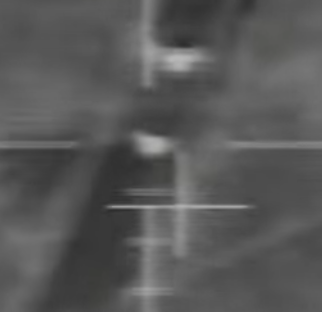 These actual MAV launches, based on my estimations of mil sizing, are from 2.5-3.5 nm slant range away. This is exactly how it looks, and EO isn't significantly better, but its definitely better.