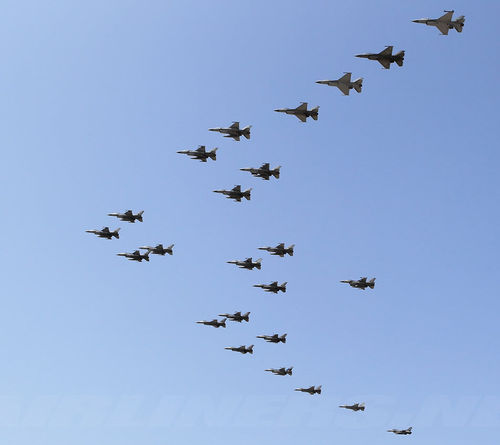 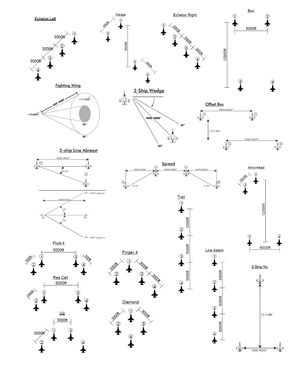 The most common flight formations we use are Wedge or Finger Four, since these are the easiest to maintain as the wingman. Wedge is basically two fighting wings separated by 3-5 miles.

Remember to not fly too close. Flying wingtip to wingtip severely limits your ability to manoeuvre and restricts your ability to check your six visually. Stay within visual range and far enough to the side that your leader can see you, but far enough away that you can see him if he changes altitude and do evasive manoeuvres without risking a collision.

A flight consists of four aircraft, or ships. The flight leader is #1, the element leader is #3. Their wingmen are #2 and #4, respectively.

In general, it's the flight and element leader's jobs to do the actual tactics parts of the mission. The wingmen are there to be an extension of the element leader's senses and firepower. Your primary tasks as a wingman is to follow your element leader, watch his back and the surrounding area visually while the lead is dealing with radar/sensors, and engage targets as directed by the element leader. Navigation and looking at the radar are not your prime concerns. You have to keep an eye on it, but your head should primarily be outside the cockpit, looking around and making sure you're with your lead in case he manouvres around. If your element leader deviates from the flight plan (especially by suddenly going very fast or very slow), you follow him. Tell him about it to make sure he hasn't missed a turn or hasn't checked his speed, but stay on him no matter what.

When attacking a target, the flight or element leader will call a group and then "SORT". This means to pick out the target in the enemy formation corresponding to your place in your formation. If you're an element attacking an enemy two-ship group, the wingman should take the enemy wingman, who's usually trailing behind. If you're in a wedge, you will be roughly lined up from left to right as 2-1-3-4. If you're attacking an enemy four-ship, 2 will take the enemy to the far left (from your perspective), 1 takes the one to right of that one, etc. If the datalink is in use, you will see which enemies your wingmates are engaging, and you might be specifically assigned a target by the lead which will show up on your radar.

A flight expecting to engage enemy aircraft will often start out in a wedge formation, i.e. one flight following the other at between 3-5 miles. When the first element gets a contact it will fire missiles and turn away, towards the second element. The second element flies on into their engagement range and does the same. The first element will then have turned back and are inbound to attack the targets again. This tactic is called a "grinder" and is very often used if your flight is operating on its own against enemies, and is used to slowly grind down the enemy numbers until they all die or the survivors run away.

Another, more complex, tactic that's seldom used is to fly both elements abrest with a large spacing of 3-5 miles. If an enemy group is encountered, they will most likely attempt to engage one of the elements. In that case, the defensive element can turn away, allowing the other element to attack the enemies from behind. 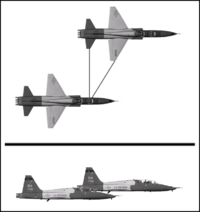 In the F-16, a finger-tip formation can be achieved by flying along a line of sight that has the lead pilot’s vertical stabilizer covering the opposite wing. The pilot can also use the wingtip missile as a guide by lining it up with the intake.

Most pilots tend to fly in a “sucked” position, meaning they are too far back resulting in the lead pilot being unable to see his wingman. It is better to be spread further and maintain the same line of sight (tail covering opposite wing) than be in a sucked position.

Echelon formations (left or right) are the same as Finger-tip when flying as a 2-ship. When more than 2, all ships are on the same side of lead so that #3 flies finger-tip off of #2 and so on. 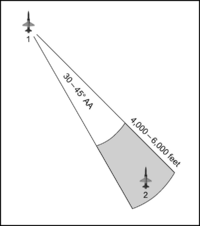 Wedge is defined as the wingman positioned from 30º to 60º aft of the leader's 3/9 line, 4000' to 6,000' back. The advantages of wedge are that the leader is well protected in the 6 o'clock area and is free to maneuver aggressively. The wingman may switch sides as required during turns. He may also switch sides as required to avoid terrain, obstacles or weather but must return to the original side unless cleared by the leader. 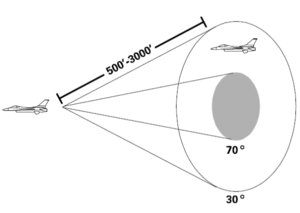 This formation, flown as a two-ship, gives the wingman a maneuvering cone from 30º to 70º aft of line abreast and lateral spacing between 500' to 3000' (Figure 3.7). Number two maneuvers off lead with cutoff as necessary to maintain position.

This formation is employed in situations where maximum maneuvering potential is desired. The wingman is free to switch sides at any point in the flight to aid in maneuvering and providing coverage for flight lead. It is essentially the same as a Wedge (only closer) but with the freedom to move from side to side. 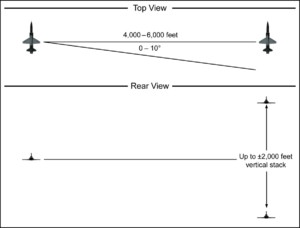 A Line Abreast (LAB) or Spread formation places the element lead and his wingman alongside of each other separated by typically 1nm. LAB formations can be difficult to fly since it requires the pilots to keep shifting their view to the side occasionally to ensure they are maintaining position. A stable flight lead flying a constant speed and heading make this easier. File:Wedge.png

As the name implies, a Trail formation is simply the wingman following directly behind his flight lead at a specific distance; typically 1nm. The key thing to remember when maneuvering in this formation is that the wingman must delay his turns slightly in order to remain in position; the wingman needs to fly to the spot where lead began his turn before turning.

A route formation is flown to enhance clearing and visual lookout, increase flight maneuverability, and ease the completion of inflight checks, radio changes, and other cockpit tasks.

Route is flown from two-ship widths of spacing out to approximately 500 feet. Fly no farther aft than the extended fingertip line, no farther forward than line abreast, and, when wings level, maintain a level stack.

Loose Route simply spreads the formation out a bit; 4 ship widths instead of two. This make it even easier to be “heads down” in the pit checking radios, weapons, etc.

As the name implies, this is the 4-ship version of fingertip formation and looks similar to the position of your fingertips on your right hand with #3 flying a mirror of #2 (on the right side) and his wingman in fingertip off of him. Need a picture? Look at your right hand.

This is essentially two Fighting Wing formations in a spread / LAB formation. When performing tac turns from this formation, #1 and #3 perform the turns as though they were a 2-ship element and their respective wingmen tag along switching sides on their respective leads as needed 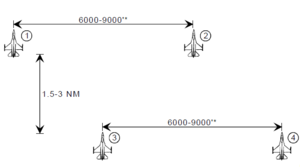 A Box formation is a pair of LAB formations with the second element in trail behind lead element. More common is the Offset Box which simply slides the trailing element to the side (#3 flies between #1 and #2).

Note in both the Box and Offset Box the #2 wingman is on the right side of flight lead. Flight leads may call or brief a “Box Left” meaning #2 (and therefore #4 as well) remain on the on the left side.

Check turns are simply gentle turns of no more than 30 degrees of bank that can be used for anything from minor course adjustments to full 360s if so desired (although there are much more efficient ways to do that). Many flight leads will call for a check turn by saying “check right, heading 090 Giving you some sense of how far this turn will go. Others may not announce a check turn at all especially if you are flying in some form of fingertip formation where it is easy to spot slight changes in his direction – it is your job to stay on your lead’s wing (or whatever position he has you flying).

These maneuvers are typically initiated from a spread / LAB formation with approximate 0.5 – 1.0nm separation. Tac turns also maintain a contract speed and are flown at MIL power using G to maintain speed. Note at high altitudes and with heavy loads this may make for a very slow turn…tac turns in general are not hard, breaking combat turns. maintain around Mach 0.8 and 2-3Gs to maintain speed. Note also that in general these turns maintain formation although positional relationships may change (start out on right side but end up on left).

The delayed 90-degree turn requires the pilot on the OUTSIDE of the turn to turn first; this may be the lead or it may be the wingman. The “delayed” pilot waits until the turning pilot reaches a point approximately 60 degrees behind his 3-9 line then begins his turn. Note the positional change of sides while the overall formation remains LAB upon completion. Note also that the “delayed” wording is implied and therefore not also spoken by the element lead. For example, if your lead says “90 right, now” you can assume that this is a delayed 90 right tac turn.

Hook turns are performed with both aircraft beginning their turns at the same time AND in the same direction (“Hook right” or “Hook left”). Note again the positional change but the outcome remains a LAB formation.

This maneuver is meant to minimize the time required to switch sides while also providing an excellent opportunity to check each other’s 6 o’clock for possible hostile aircraft. It’s also a fun maneuver to perform as it results in a very close pass similar to a cross turn; wingman is responsible for deconfliction (deconflict high).

Related to the Hook Turn is the Cross Turn. This turn also starts with both pilots initiating the turn simultaneously BUT they turn INTO each other. This results in a wider LAB formation upon completion of the 180 degree turn. The Cross Turn is often accompanied by a Shackle to close up the formation.

While similar to the delayed 90 turn, this turn is different in that both pilots execute the turn simultaneously. This will result in a formation change (from LAB to Trail or from Trail to LAB). When executing from a LAB formation the turn is always done away from the wingman so that the results are a trail formation with #2 in trail of lead. Calling for a second in-place 90 will turn the formation back into a LAB formation. Also, if an in-place turn is desired, lead MUST specifically use the words “in-place” so as not to be mistaken for the implied “delayed” turn.

Much like the delayed 90 turn, this turn requires the pilot on the OUTSIDE of the turn to turn first. The “inside” pilot may be required to make a slight check turn into the turning pilot to aid his transition to a turn in the called direction. There is no such thing as an in-place 45 and so just like the “delayed 90” the word “delayed” may be dropped by lead and can be implied for all 45-degree tac turns.