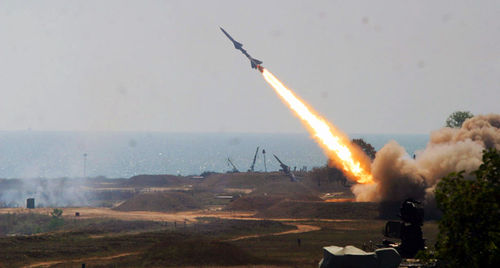 Most dangerous: If you enter the systems engagement range. SPAAGs are exponentially more dangerous the closer you are to them.
Best method of engagement: Stand-off attacks with ATGMs or lofting/high-altitude attacks with bombs. Anti-Radiation missiles can be employed against Fire Cans, but are unlikely to hit a SPAAG.

For highly lethal systems, you need to have a better plan - Nap of the Earth flight (NOE), or avoidance. If something like an SA-10 launches on you, you're going to have limited effect even with these tactics.

There is no warning when an IR SAM is fired, except for looking for and seeing the launch. The SA-13 will show up on the RWR because it has a ranging radar, but you will still not get a launch warning. Defeat the missile by breaking into or away from it and using flares. The best way to avoid them is by staying high (usually above 10000ft AGL).

Most dangerous: Just below 10-15,000ft.
Best method of engagement: Mavericks or cluster bombs from outside engagement range of system.

Common to all radar SAMs except the SA-10 is that they will very clearly (and loudly) announce that they’ve launched a missile at you. It is important to look for the missile launch, however, as you have no other indication of where the missile itself is, and seeing it is vital to avoid being hit by it. Use ECM to degrade the range at which a SAM can be launched at you, but if one is launched, use chaff to try to break the radar lock. Unlike in real life, in BMS missiles cannot reacquire a target once the lock is lost.

The SA-8 is a regimental and battalion level air defense asset which is extremely common in the Syrian (as well as Russian) ground forces. The SA-8 is one of the most effective SHORAD (short range air defense) systems. It should be respected just like the SA-11, but the main difference is that it's max effective range is only about 7 miles, and will more likely fire on you at 5 miles, It's minimum engagement envelope is about 600 feet, meaning it is possible to do a NOE attack on them. Like the SA-11, each vehicle has an integrated FCR.

They are arguably more dangerous than the SA-11 due to the mere fact of their number in modern equipped Russian-style armies: there will be dozens present in a large scale offensive.

Defense Procedures (in order of effectiveness):

SA-10's are deadly. If one spikes you and then turns off, assume it has fired at you. If it turns on again, it is likely terminally guiding its missile in on you. Destroy this sucker fast and get out of Dodge!

The SA-11 is basically an SA-6, except each vehicle has an integrated FCR (it's that green rectangle on the left side of the vehicle above), and the missile is more maneuverable. This is to say it is one of the deadliest SAMs you will encounter in BMS.

Because each vehicle is it's own radar, you will need to destroy every vehicle in a battalion for effective SEAD.

These are mobile units which will often be encountered as a pop-up threat, making SEAD extremely dangerous. The SA-11 is a brigade air defense asset .

Defense Procedures (in order of effectiveness):

These two are right near the systems' max range, which makes sense - they shoot as fast as they can lock you up. At this point, if you don't have a jammer the best bet is probably a fast split-S and run the other direction. If you're quick and keep your wits about you, it should be fairly easy to simply outrun the missile.

With jammer turned on:

So for missions with popup SAMs, it's a good idea to have your jammer at hand - you might not want to blare it, but definitely be ready to pop it on when a SAM comes up. It will give you time to maneuver, take a HARM shot or simply run away without having to immediately worry about missiles coming at you. By far the most common SAM I've encountered in my flights with UOAF and my own personal campaign is the SA-2 - learn it, love it, figure out how to beat it.

If you want to set up a practice SAM defense TE, this is how you can do it:

Now you have an F-16 flight headed towards a SAM system of your choice. On the map you should see an F-16 along the flight path, as well as a red NATO Air Defense unit symbol. If you see both, you've done it right. If not, repeat the part for whichever unit you don't have.

Finally, you want to adjust the distance from your jet's starting point to the target. I try to start ~30 miles from the target, because that way I have time to generally get situated in the cockpit before I have to think about engaging.

The easiest way to adjust your distance is by changing the clock time in the top right.

In order to load it, just go back to the TE tab, hit "SAVED" and find the name for your TE. The rest is as usual.

This method can be used to pit any air unit against any ground unit, and you can add multiple air or ground units by just right clicking, adding flight/battalion, selecting the unit you want and hitting OK. I personally like to fly against groups of SAMs that are co-located or at least within 5 NM of each other to see how they will react, and to practice evading multiple missiles from multiple sites simultaneously. This is the most challenging and realistic practice, so I definitely suggest adding more than one SAM once you feel more confident. It's also the same for pitting air vs air, when you switch to DPRK just add a flight instead of a battalion, so if you want to practice against some MiGs or SUs you can easily do that as well.