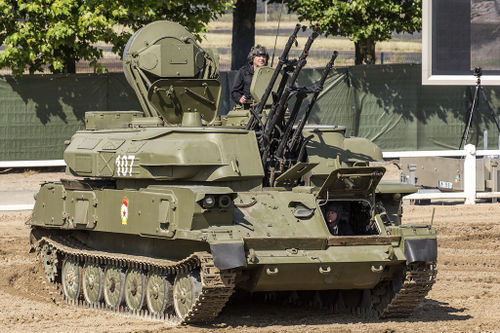 BMS Anti-Aircraft-Artillery are several threats systems that can engage you at low to high altitudes.

Heavy (85mm+) AAA systems are found in AAA battalions which primarily use large-calibre guns firing altitude or proximity fuzed shells (think traditional "flak"). These are often bolstered by the use of a ‘Fire Can’ fire control radar which shortens their bracketing time (the time in which it takes for AAA fire to range and close in on your aircraft) against targets that enter their envelope. If you see explosions bracketing your plane, you should immediately change your altitude and start jinking until out of range.

Smaller calibre (20-40mm) AAA guns and SPAAG (Self Propelled Anti-Aircraft Gun) systems such as the ZSU-23-4 ‘Shilka’ are deployed with other battalions for close-in protection. Once you enter the range of these systems, it can be hard to avoid their fire while in range and line of sight. Using terrain masking or stand-off attacks are the only safe way to avoid them.

An ‘A’ on the RWR designates that a Fire Can or SPAAG is tracking your aircraft.

IR SAMs are normally found in HQ, mechanised and tank battalions. Normally these systems are used in conjunction with AAA and mobile Radar SAMs to provide a tighter cone of cover around their parent battalion. Systems include the SA-9 and SA-13 vehicle mounted launchers, and the SA-7,-14,-16, and -18 MANPADS.

While limited compared to their Radar guided counterparts, IR SAMs help to fill gaps that Radar SAM systems can leave at close engagement ranges since they have short acquisition and travel times.

The single vehicle systems are generally shorter ranged and are designed to work as point defence for a battalion, similarly to the IR SAMs described above, but with more range. These vehicles contain both search and fire control radars as well as multiple missile rounds. Examples include the SA-8, -15, and -19 (Tunguska). These missiles are typically very quick and manoeuvrable but with limited range and ceiling. Stay away from them; if they fire they are very difficult to defeat.

The second type are area and theatre defence SAMs. These are generally static or merely mobile, needing to set up in an area before they can fire. These battalions commonly consists of a Fire Control Radar (in reality also one or more search radars, but we don’t have those in BMS) and several launchers, in addition to some support vehicles.

In early models, like the SA-2, -3, -4, -5, and -6, and also the SA-10, there is only one, central, fire control radar that guides the missiles. If you kill that one vehicle, no more missiles can be launched. Later variants of the SA-6, i.e. the SA-11 and SA-17, however, have equipped every launch vehicle with its own radar, meaning that the battery can still fire until you have destroyed every single launcher.

The combination of the SA-11 at brigade and SA-8 at battalion/regiment means that the Syrian army may be protected at all times and it will be impossible to SEAD the entire army and then bomb them into oblivion. This is unlike the Serbian and Korean armies, the most dangerous mobile systems you would encounter was often a SA-9/SA-13, and these could be avoided by simply staying above 14,000 or so. This is not possible against the SA-8/SA-11, you will have to destroy these vehicles in order to attack into an area they are protecting - you cannot avoid the weapons envelope easily. NOE approach is effectively impossible with the SA-11 and very difficult with the SA-8 - not to mention the fact that the density of the enemy assets would mean certain death by ground fire or MANPADs.

Another key point is that it restricts our engagement areas. We can no longer spread packages out over 30 or 45 miles and separate them from SEAD cover because the lethality of these systems means that SEAD must be performed immediately.

As it is very difficult to defeat these systems, you must avoid the envelope if possible. If you DO get ambushed, immediately jettison your stores and perform a max G break away from the missile while employing all of your chaff. Both the SA-8 and SA-11 are highly resistant to ECM and will do followup launches, so you will need to think very carefully in the few seconds before you perform a defensive maneuver to figure out the best way out of the envelope or to terrain to mask behind.