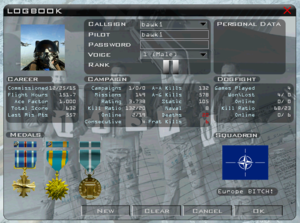 An example logbook which I cultivated over my entire BMS career

The logbook is your service record, it will track when your pilot was first created, flight hours, score, missions flown and A-A/A-G kills just to name a few statistics. The logbook will also show the medals you have earned and will determine the rank which is shown when taking a seat.

At the end of each flight you will get a briefing where you can see how well you performed your mission task. Some mission types are notoriously hard to succeed in, while others(AI/CAS) are more lenient when it comes to on-paper success.

As you accumulate points your Total Score will rise and you will get promotions at certain milestones.

There are several tools to modify your logbook file(User/Config/callsign.lbk), I have found logbookmanager too work rather well. Always make sure you back up your .lbk files before modifying anything.

Pilots who participated in a few of our campaign events but could not make it to the final event of the campaign might want to give themselves a Korea Campaign medal, after all you earned it. Right?