This page is under review. 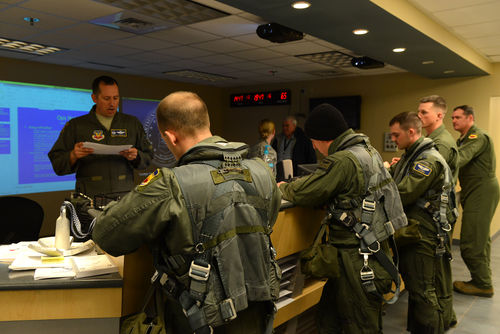 The following are the steps to create a 20-player event frag that is capable of being hosted on a dedicated BMS server.

Test your mission on the server

You can use any image editing software you want. One option is TechSmith's Snag-It. This tool has good cropping, image resizing, text effects, line effects, arrow effects, and opacity options. But it is not free. Paint.net or anything that you have is good enough to create basic mission graphics.

Sometimes, you need to use Mission Commander to fix or enhance your mission. While MC seems like a stable choice, there is a risk that you will corrupt the campaign. Therefore, it is suggested that MC be used sparingly. When using MC:

Sometimes the enemy is able to knock out your airbase. The first suggestion is to start fragging flights from other airbases, but that may not be possible to accommodate 20 players due to a lack of aircraft. In special instances, you may want to repair a destroyed airbase (friendly or enemy).

BMS consumes tanks and weapons, regardless if they are brought home. This can lead to annoying situations where you run out of things like fuel tanks or limited specialized weapons that you don't use. You can restock certain supplies for your squadrons.

BMS will not allow you to use 2 reserve fighters. This can lead to shortages when trying to frag missions. Furthermore, if you are tracking losses, there is usually a manual restocking rule that is in play. This is how you add or replenish your fighters:

Sometimes your strike hits an enemy airbase but BMS reports that it is still up. If so, here is how you can know the runways or other structures out of action:

Sometimes the AI can frag a bunch of flights that you do not want. Rather than cancelling them in game, you can remove the flights completely using MC:

Due to the way ships work, it may be necessary to custom edit the waypoint paths of your carrier to that it is pointed into the wind. You typically do not want your carrier aircraft trying to land in a crosswind.

Sometimes it is fun to choose the callsigns of your package aircraft rather than letting BMS do it. Here is what you need to do:

Hosting on the dedicated server

UOAF has its own dedicated server. This is a VM with no graphics card, so some special steps are required to get it to work. Furthermore, when hosting on a dedicated server, it is important that the server be running in 3D while the mission is being flown by humans. Not doing this results in invisible aircraft and missiles, and generally glitchy behavior.

You need to be granted TeamViewer permission to access the UOAF BMS server.

Taking the server in

Shutting the server down

18 rules for surviving a campaign

The IADS (Integrated Air Defense System) is now FULLY operational. The BIGGEST killer of aircraft ISN’T ENEMY AIRCRAFT. The BIGGEST killer of friendly aircraft is , SAM missiles and their eyes, RADAR. Search radars and AWACS now function as they should, and can no longer be ignored. Long-range search radars are now a THREAT of the HIGHEST order and should be dealt with accordingly. And often.

2. FLYING THE COURSE THE AI GENERATES...

Is absolute suicide. ALWAYS modify your course, altitudes and speeds before you leave the base, as well as in flight when the tactical situation ON THE SPOT dictates. Move you waypoints to minimize your exposure, and lower your altitude to minimize your radar exposure. Time over target is fine, but if you can’t make it due to tactical considerations, so be it. Remember, the AI really doesn’t care WHAT side wins or loses…the difference between flying a successful mission and adding a death to your pilot record is the gray matter locked in your brain housing group. You know the threats, and what they’re capable of. Why fly right over the top of those threats just because the computer wants you to have a wild ride?

Until A-G ordinance is expended, and unless you have NO other choice, DO NOT engage enemy aircraft. If you have a flight of enemy aircraft in the area, go under them, go around them, but DO NOT engage them. If you want to win the campaign, taking out enemy aircraft one by one WILL NOT DO IT. Ingressing into the target, you are Cat3, you are heavy and you KNOW if you yell for help from AWACS they won’t come. You’ll burn precious fuel fighting these guys with one arm tied behind your back. Get low, get fast, get away from the threat and continue with the mission.

4. The Element Of Surprise

Always, ALWAYS use the element of surprise. If you can attack from out to sea, do it. If you can come into the target from the north, do it. The AI is EXPECTING attack from the SOUTH (In the Korean Theatre) or the WEST (In the Balkans Theatre). Attack from the east, from the west or from the north if possible. ALWAYS recon the target area, and find out what the threats in the area are, and attack from the weakest side. If possible always have a clear view and run to the target. Sometimes that isn’t possible, but strive for that whenever possible. The exception to this is an OCA runway strike. Always attack from the long axis of the runway (one way or the other). These targets are usually heavily defended. Low and fast is the way to go. One pass only.

If you can hit them with a heat seeker they are way too close. If you are out of missiles you are OUT OF AMMUNITION. Mano A Mano combat went out with the Crusades. Mug the enemy. Ambush Them. The enemy doesn’t deserve, and damn sure won’t give you, a fighting chance. The further away the better (as long as it’s in the weapons envelope). The gun is included on your aircraft FOR MORALE PURPOSES ONLY – TO MAKE YOU FEEL BETTER. THAT IS ALL. IF YOU OR YOUR WINGMAN ARE OUT OF MISSLES YOU ARE OUT OF WEAPONS. CLEAR THE AREA AND RTB. Supply in this game is iffy at best and getting replacement aircraft is few and far between (if at all).

Always set out an alternate target in the general area, but outside the range of air defenses of the main target. It’s as simple as creating a new waypoint and dragging it over an alternate target. If you can hit the main, fine, bypass the alternate and go home. If not, switch to it and press home the attack.

A-A weapons should be considered SELF DEFENCE weapons. They are there to KEEP THE ENEMY OFF YOU, NOT TO PISS OFF ENEMY FIGHTER PILOTS. There is NOTHING wrong with coming home with all you’re A-A weapons. Ideally, if the plan works as it should, you SHOULD come home with all you’re A-A ordinance. If you have to cut your way out of a hot target, so be it. DON’T GO CRUISING FOR TROUBLE. YOU WILL FIND IT. The F16 is an agile fighter, but doesn’t have enough hard points to carry A-G ordinance with enough room left over to self-escort. If you are on an AG mission, LEAVE THE AIRBORNE ENEMY ALONE. I know that goes against the fighter pilot ethos, Top Gun movies, and all the press and PR that the various flying military services like to put out. Remember, there are old pilots, and bold pilots, but there are no old bold pilots. Trying to fly a burning jet with a sucking chest wound is nature’s way of saying “slow down”

NEVER fly over the FLOT or ingress to the target over 300ft AGL unless you have stand off weapons, or a mission profiles that demands you use yourself as bait (SEAD). You are walking into the enemy’s house with the intent of killing his dog. He ain’t going to like that, and if he can see you do it (Radar, BARCAP, passing flight of aircraft, ground troops) he’s GOING to try to stop you. Do it quick and stealthy as possible, and get back to a safe area as quick as possible. DON’T HANG AROUND AND WAIT FOR THE COPS.

DON’T make multiple passes over a hot target. They WILL have the range on you and will get you on the second pass. IF you have undropped ordinance, go hit the secondary with it.

In the early stages of the first two campaigns, China (and possibly Russia) will be neutral combatants, but will be flying support missions (AWACS and Tanker duty) for North Korea. Although killing those assets at first seems like a good idea, a better plan is to strike bases for SU-27’s in China, THEN apply rule #1 to the Chinese AWACS and Tanker aircraft. If you’re beating the campaign too badly, the Chinese will come in anyway. Neutralize the cover for the HIVAL aircraft, and then apply rule#1.

Use them SPARINGLY. A lot of people don’t know this, but the ALQ-131 covers ONLY the front and rear quarters of the aircraft in pie shaped wedges at about a 45-degree angle. The quarters along the 3/9 like are UNDEFENDED. All you are doing is putting a big target on your forehead that SCREAMS “I AM HERE”. You can see it yourself when you are tracking an aircraft that is using active jamming. You can’t lock him up, but you can tell that he DAMN SURE doesn’t WANT anybody locking him up, either. There has to be a reason why (no matter what side he’s on) and the enemy can tell who’s actively emitting and who isn’t just as easy as you can. Unless the enemy has a HARD lock on you aircraft (a diamond icon in your RWR) leave it OFF. And then flash it as needed. Some missiles out there have HOME ON JAM capability and will lock into your jammer and be just as deadly. Flash the jammer, pop some chaff, then shut it down and evade. If it’s still tracking, repeat the process, try to get as low as possible as fast as you can while keeping the missile on the 3/9 line, and hope for the best.

Carry as much ordinance as you can load on the aircraft. Hit the target as HARD AS YOU CAN TO DESTROY IT. If you just damage it, you haven’t accomplished the mission, as the target will be back in commission and operational, and you’ll just have to hit it again.

In an A-G mission envelope, you don’t have the fuel or A-A weapons to have much combat persistence. Ingress under cover (NOE), or outside radar coverage from the sea. Get in quick, hit the target, and get to the nearest safe are (weather it is out to sea or over the FLOT) as fast as you can. You are in a high threat environment, low on fuel, and 4 missiles are not enough to keep the enemy off you for very long.

18: DON’T PISS OFF YOUR CREW CHIEF

This one is also self-explanatory