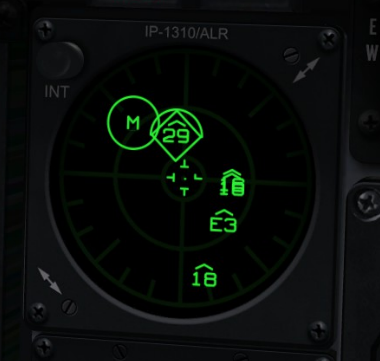 The Radar Warning Receiver consists of several antennas, a processing unit, a radar library and a display.
It allows the aircraft to detect and identify radio emissions of radar systems reaching the aircraft and is a vital tool in both A-A and A-G operations for identifying, avoiding, evading or engaging threats.

Video from Krause made with BMS 4.32

The RWR interface in the cockpit is made through 3 main components :

Note : Other RWRs may be installed in other F-16s and have some differences

The following tables are showing the RWR symbols. Airborne symbols are displayed with an inverted V on top of them to differentiate them from the ground emitters.
Note : Those tables are for the US default RWR (ALR-56) Symbology may differ on foreign F16 (IAF, EAF, BAF etc ...)

Those tables does not includes active radar missile (Fox 3) symbology.
When a fox 3 will be active it will be displayed on your RWR using a M symbol (stand for Missile) 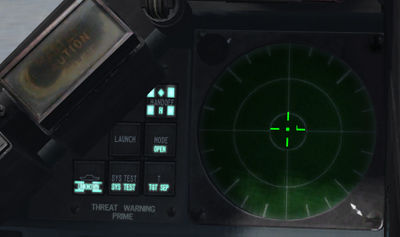 TWP panel (Left of the RWR)

used to set the mode of operation of the RWR. The 4 modes are: Normal, Diamond Float, Transient and Latch.
You should simply know that the mode giving the best Situational Awareness is the Diamond Float mode where the diamond floats to the highest priority symbol. That mode is entered with a short push (less than one second) on the HANDOFF button.
The bottom light of the indicator is on as soon as there is power and the top indicator comes on only when a handoff mode is engaged (Diamond Float, Transient, Latch).


Using the HANDOFF button controls how each of these modes are entered and controls the function of the diamond symbol on the display.

this indicator flashes at 4Hz as soon as the EWS (Electronic Warfare System) detects a radar missile launched at ownship.
The indicator is backed up by audible warning tones. The indicator features a pushbutton to test the launch warning. Press the button to check the audio tone and indicator light.

enables some declutter of the RWR display by displaying only the 5 most important symbols instead of the usual 12 symbols (16 when UNKNOWN mode is selected).
When the priority MODE button is depressed the RWR enters PRIORITY mode, the top light comes on and the bottom light OPEN goes off, as both lights are mutually exclusive.
When PRIORITY mode is enabled the top PRIORITY light will flash if the EWS detects more than 5 threat emitters. The RWR remains in this mode until the pilot exits PRIORITY MODE by depressing the button again. At that time the top light extinguishes and the bottom OPEN light illuminates.

When depressed the top (U) light illuminates and the RWR displays U symbols (unknown radar). It can then also display 16 symbols instead of the usual 12. The pilot can deselect this mode by depressing the pushbutton again. The top light then extinguishes.

The bottom light of the indicator will be on whenever the EWS is powered. The top light will come on whenever the system test is running.
Depressing the push button will initiate the test sequence that will run for a few seconds. During that time all TWP lights and modes will be tested. Some alphanumeric codes will also be displayed on the RWR.

Depress this indicator when you want to have a better view of two emitters which are close to each other.
When depressed the top TGT SEP light illuminates and the symbols on the RWR are spread out for 5 seconds. After that time the RWR reverts to normal and the top light extinguishes.
The bottom light is on as soon as power is applied. 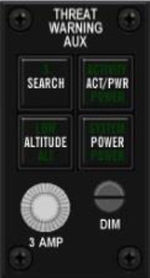 applies and removes power to the EWS suite. The green indicator comes on when the EWS is powered.

allows ‘S’ search radar symbols to be displayed on the RWR display if the EWS is powered and detects a search radar; by default they are not.
With SEARCH enabled a SAM radar in search mode will display as an ‘S’ well before you would expect to see its acquisition symbol if SEARCH was not enabled, giving you an early warning in most cases.
With the SEARCH option not active the green ‘S’ indicator on the TWA will blink at 4Hz whenever the EWS detects a search radar painting the aircraft. In that configuration ‘S’ symbols are not displayed on the RWR.
The green ‘S’ indicator on the TWA will remain lit as long as the SEARCH option is active. A further press of the button deactivates the SEARCH option.

is both a pushbutton and a dual indicator. The pushbutton toggles between HIGH & LOW altitude threat assessment biasing. The EWS is able to categorize the SAM threat according to their lethality at low or high altitude.
The top indicator labelled LOW comes on if the EWS is powered when the LOW option is selected.
The bottom indicator labelled ALT comes on whenever the EWS suite is powered.