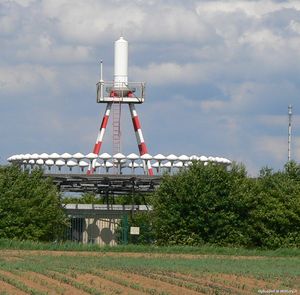 TACAN was developed during the late 50s and early 60s by requirements from the US Navy for a beacon locator system for guiding aircraft back to their carrier. Existing radio direction finding equipment (RDF) was either too large to be installed on a ship, or required multiple transmitters in order to triangulate an aircraft’s position. TACAN, on the other hand, requires only one transmitter, and the antenna can be as small as two metres tall by one metre wide, even allowing it to be mounted on a truck and emplaced in forward positions.

TACAN consists of two separate systems working in concert: DME, or Distance Measuring Equipment, and the direction finding equipment. Both systems work in a frequency range in the high UHF bands (962-1215 MHz), divided into 252 channels spaced by 1 MHz.

DME is a system that uses light-speed delay calculation to calculate range. It works by an aircraft sending a series of interrogation pulses to the DME station, which then responds with the same series of pulses after a fixed time. The aircraft then uses the time since the pulse was sent to calculate the distance to the DME. Each aircraft uses a separate pulse code transmitted at random intervals to handle multiple aircraft interrogating the same DME. The accuracy of DME is usually less than ±0.5 nmi, and roughly 100 aircraft can receive range information simultaneously

The actual operation of the TACAN’s direction finding equipment is fairly complicated and requires some understanding of electrical mechanics and radio antenna theory, so I won’t go into details here. An in-depth technical explanation is available in the reference section. Essentially, the TACAN station uses a rotating antenna assembly (or a non-moving phased array transmitter) to modulate the signal coming from it depending on the direction your plane is from the antenna. In order to establish North, a reference signal is transmitted when the antenna sweeps through East (confusing, I know), which is compared to when the maximum signal from the rotating antenna is received. By this comparison, the direction to the TACAN transmitter can be calculated. The accuracy of TACAN’s bearing information is less than ±1°.

In BMS, TACAN can be set to one of 252 channels: From 1-126 in two bands, X and Y. The F-16 has primary and backup TACAN controls. The primary is the Up-Front Controller (UFC), where TACAN can be entered on the T-ILS page (ICP numpad button 1). TACAN channels are entered by entering the channel number and pressing enter. The band is toggled by entering 0 and pressing enter. TACAN can be switched between A/A and A/G by pressing the Data Control Switch to the right (SEQ). The backup TACAN control is active when the CNI switch is in the BUP position. Now you enter TACAN channel on the Aux Comm panel. In both cases you switch to TACAN navigation by turning the Instrument Mode switch next to the HSI to TCN. See the BMS manual pp 123-125

To navigate by TACAN you enter the desired TACAN channel into either the UFC or the Aux Comm panel, then switch the Instrument Mode switch to TCN. Note that in either case, only your HSI will be affected. Your HUD and HSD will still only display steerpoint navigation. In TACAN mode the HSI will display the range to the TACAN station at the top left and show the bearing as the outer arrowhead on the HSI dial. If a course is specified, the course deviation indicator will show if you’re offset from a line going in the set direction towards or away from the TACAN station. If no TACAN information is being received on the set channel, the distance readout will show 000 and there will be a red flag visible on the HSI. If only distance information is received, the bearing indicator will spin around the HSI at about one revolution every twelve seconds. In BMS, airfield TACAN stations have a range of between 20 and 100 nautical mile, but note that TACAN beacons operate on line-of-sight frequencies, so if you’re flying low or the airfield is obscured by a mountain your TACAN performance will be degraded.

TACAN can operate in an air-to-air mode that allows two aircraft to act as beacons to each other so both pilots can find the range between aircraft. In order to set this up, both aircraft have to set their TACAN to A/A mode. Additionally, they have to be on TACAN channels that are exactly 63 channels apart in the same band. In other words: If one plane is on channel 10X, the other has to be on (10+63)=73X in order for the system to work. (Something like 70+63=133 won’t work because the highest legal channel number is 126). At this point, the distance between the aircraft will be displayed in the lower-right portion of the DED, as well as on the HSI if the Mode knob is set to TCN. If more than two aircraft are part of the same A/A TACAN setup, you’ll only share information with the closest aircraft to you. The KC-10 is the only aircraft in the game capable of providing TACAN bearing information.

Practical use of TACAN

Only airfields and airstrips have TACAN beacons in BMS, and they’re mostly useful for guiding your aircraft to an airfield that you either haven’t got steerpoint information on, or if you’ve lost your primary navigation instruments. If you lose your HUD and MFDs or your GPS/INS system, TACAN is the only instrument navigation system you have left in the F-16. The TACAN information for all airfields in the KTO are listed in Korean Volume BMS 1002 in your approach and navigation charts folder in the BMS Docs folder.
TACAN approaches work similar to other non-precision approaches using directional beacons (such as VOR/DME).

Tankers in BMS all have TACAN beacons. On all tankers except the KC-10, they work the same as on the F-16, i.e. they will only give a range indication. The KC-10 additionally has a TACAN bearing transmitter, and will give the correct bearing to rendezvous with the tanker. To get the TACAN to the tanker, call AWACS and request a bearing to tanker. AWACS will then provide navigational data as well as the TACAN to the tanker. Note that as discussed in the A/A chapter, the tanker is actually transmitting 63 channels higher than the one you’re given, but this is purely trivia and you don’t have to calculate the correct TACAN channel, just use the one you’re given. 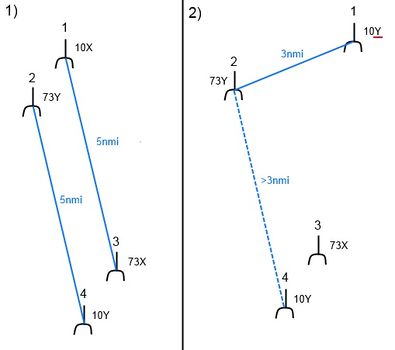 The recommended implementation to use for a four-ship flight of players is as follows:

The second flight would use 11-74, third flight 12-75 and so on. The primary advantage of this setup is that it allows the flight and element lead to coordinate element spacing in the formation. The wingmen should be within visual anyway, so the distance from lead to wingman isn’t as important. However, if the lead needs to find the range to his wingman for whatever reason, all he needs to do is switch TACAN bands from X to Y, and he will get the range to the wingman. See the example given in figure 1. Situation 1 is the standard setup. In situation 2, the flight lead has changed his TACAN band to get a range to his wingman. As long as the wingman is closer to #1 than #4, #1 is the one getting distance data.

AI players also transmit on A/A TACAN while in flight. These transmissions are based on the old Falcon 4.0 communication system, and is therefore somewhat arcane and cannot be changed. Exactly how it works with multiple packages is unknown, but the basic setup for one package is as follows:

The default TACAN channel can be set in the DTC by using Weapon Delivery Planner or by manually editing your callsign.ini file. For an explanation of the manual method, see the BMS manual p. 148.

TACAN works the same way in DCS: A-10C as it does in BMS, except for entering TACAN channels, which is only done on the TACAN panel, and the indication on the HSI. The HSI in the A-10 has two course arrows. The long thin one marked “1” will point towards the selected TACAN station if TCN is selected, while the short broad one marked “2” will always point towards the selected steerpoint.