BVR techniques differ each in each engagement according to your capabilities, the targets capabilities and secondary factors like known SAM locations.

If you are able to out range the enemy fighter with your BVR missiles(with for example AIM-120B/C against the Russian AA-10) you can spend more time guiding your missile to the target, whereas in engagements with equal capabilities(for example AIM-120C against AA-12) you need to start your defensive turn as soon as you can get your missile off the rail.

When engaging a target it is favorable if you are at high altitude and high speed prior to the engagement as your missiles will be able to travel further while you will have a lot of altitude you can convert into energy when doing your defensive turn(see BFM). 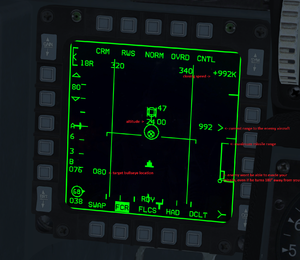 In the image above you can see the typical FCR symbology when engaging a hostile aircraft. On the right of the display you can see a triangle, which indicates the current range of the bogey in relation to the different kill brackets you can see below.

The same symbology is also available in the HUD: 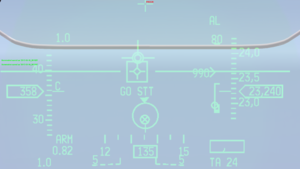 The target is outside of missile range

As you close distance to the target the triangle will move down on your HUD/FCR, when it reaches the first large bracket it will be within maximum range of your missile. 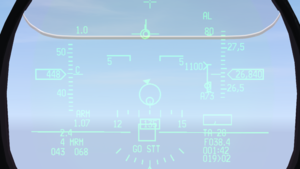 The target is now in maximum missile range

At this point the missile could theoretically hit our target, but only if the target keeps flying at the same altitude, bearing and speed. Against a fighter such a shot will most likely not hit, engaging larger aircraft like bombers, tankers or AWACS might yield a kill. 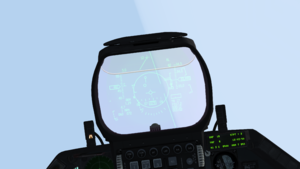 The target is at the edge of the high pK bracket. Take the shot!

In this last picture the target triangle has moved down the large bracket towards the box at the bottom, this is the high pK(probability of kill) box. While he is still outside of our pK box we can safely take the first shot and discourage our target from turning in to us and firing a missile of his own. If we wait a little longer and close more distance he will be within our high pK box, at which point the target will not be able to evade your missile by simply turning away and kicking the afterburner. The only thing that can save him now is defensive manoeuvres coupled with lots of chaff.

Basic procedure in a BVR engagement

Scuby from the 31st VFS has created a few BVR instructional videos on YouTube you can watch to familiarize yourself with some advanced BVR tactics. In his case he is up against a opponent with similar capabilities so you can see him turning defensive earlier than you would have to against a less capable opponent.

Indicating a radar lock-on to unknown aircraft. A request for a “BUDDY SPIKE” reply from friendly aircraft meeting these parameters. " (Multiservice tactics, Techniques, and Procedures, 25)

A raygun call contains the following information to be communicated from the targeted over comms.

a. Fighter locking an unknown target up

b. Friendly being locked up

First example - you are a #2 in a flight scanning the sky when you pick up a contact appear near a friendly flight.

Response A) Someone responds with: Buddy Spike bulls 176 for 18, angels 14, climbing.

Response B) No response