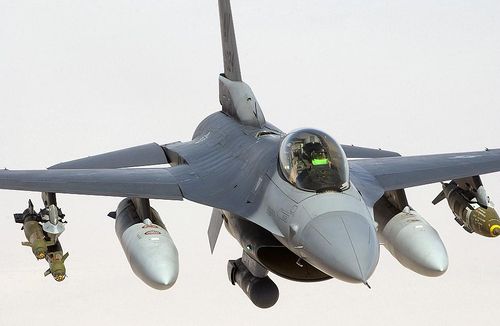 Laser guided bombs use semi active laser guidance to strike a target with great accuracy. They are most commonly used to strike difficult precision targets. These weapons use on-board electronics to track targets that are designated by laser, typically in the infrared spectrum, and adjust their glide path to precisely strike the target. The most used versions in the BMS F16 are:

Setting up the LGBs is a multi-step process starting in the 2D loadout screen. Once in the loadout screen the BOMB laser code can be changed.
You will still need to check the TGP code on your DED once in the 3D. The way to check or change the TGP code is by pressing the LIST button on the ICP then navigating to the MISC page by pressing 0 and finally pressing 5 to access the laser page.
Available codes range from 1111-1788. You will also need to change the A-G section from TRNG to CMBT for the laser to fire.
It is also possible to change the auto lase time at the bottom of the laser DED page.

The laser is an essential piece of equipment when employing LGBs as it helps guide the bomb onto its target. Laser is aimed using the TGP, however TGP operation is covered in the Air-to-ground TGP tutorial.

When the laser is armed additional information is included on the lower part of the pod display, below the track status field.

A couple of things to note about the TGP symbology are:

To release the LGBs:

During LGB delivery the laser is designed to fire automatically for terminal guidance at the pre-defined time from bomb impact that is set on the laser DED page; the laser will keep firing until 2 seconds after the expected impact time. The pilot can choose to fire the laser manually by using the first trigger detent after bomb release.

Buddy lasing in BMS can be useful in dropping your LGBs on a point which another aircraft is lasing. This is a fairly simple process.