In falcon BMS, the F16 can carry either a Lantirn or a Sniper XR designation pod depending on the block. Those targeting pods (TGP) provides positive target identification, autonomous tracking, GPS coordinate generation, and precise weapons guidance from extended standoff ranges.
In the air to ground task, they're mainly used to guide LGB on their targets. They also are equiped with a boresight correlator for automatic lock-on of the AGM-65 Maverick imaging infrared missiles.

The AN/AAQ-33 Sniper Extended Range (XR) ATP is an electro-optical targeting system in a single, lightweight pod that is compatible with the latest precision-guided weapons for detecting, identifying and engaging multiple moving and fixed targets in air-to-air and air-to-ground engagements.
The Sniper XR ATP installs under the engine inlet on the right side of the aircraft as with previous targeting pods, yet is considerably narrower in diameter and lighter in weight, offering corresponding drag benefits. 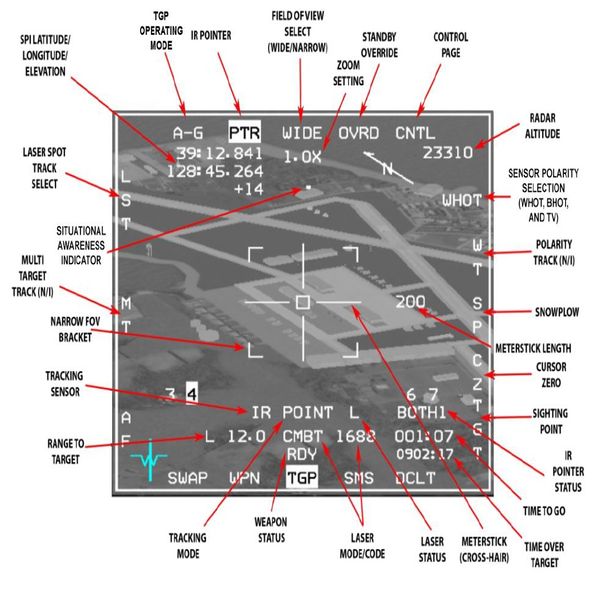 There are 2 different types of sensors in the Sniper TGP. They both have settings and zoom that can be adjusted.

The FLIR sensor detects relative temperature differences between an object and its surroundings and displays them, roll-stabilized, as different shades of grey on the MFD TGP page.
The FLIR video can show white objects as hot (WHOT) or black objects as hot (BHOT). Polarity can be changed by pressing OSB 6 hands off or by TMS-left on the HOTAS (with TGP as SOI).

The TV sensor can be selected by pressing OSB 6 or by clicking TMS-Left twice in less than 0.5 seconds. The TV has only 1 FOV 0.5° x 0.5° and one polarity, so TMS-Left will not change anything in this mode.

is located in the top right of the TGP screen and shows an arrow pointing north.

The Sniper XR ATP provides a laser transmitter and receiver operating at both combat and eye-safe wavelengths. The laser is used for ranging for navigation updates, for mark points, designating for some weapons and for LGB delivery.

Laser setup and use for LGBs has been covered in the Laser guided bombs section.
Note: This applies to all CCRP bomb drops; hold the pickle button for a few seconds before the release cue. 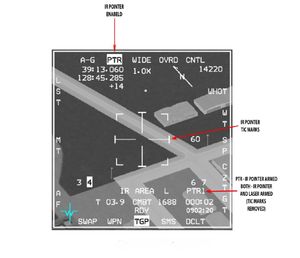 The Sniper can fire an IR Pointer beam that can be detected by NVGs. IR pointer status can be selected by pressing OSB 2 on the MFD or by 2x TMS-Right < 0.5 seconds.

Use of IR pointer with laser designator

Switching between IR Pointer and laser

There are multiple submodes in which the TGP operates. They are noted below.

In slave submode the Sniper follows the System Point Of Interest (SPI) position. In A-G mode the SPI position is determined by the current sensor that controls the SPI - usually the steerpoint until TGP is put into a track mode.

Laser codes on the DED page 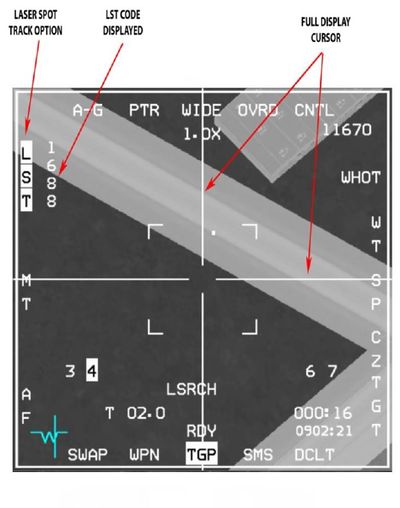 There are two modes in which LST operates and they are displayed at the bottom of the HUD:

Note: The SPI position and the LST tracked spot position may not coincide. The pilot should command AREA or POINT track before dropping ordnance on the SPI. 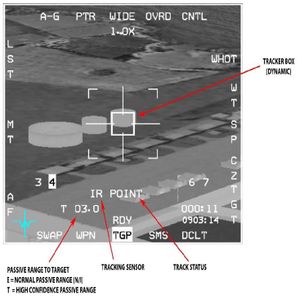 The explanation for this can be found under the Mavericks section.

Note: All the cluster munitions have been set with a BA of 2500ft and the frag radius has a rectangular shape with the longest side facing the flying direction at the moment of the drop