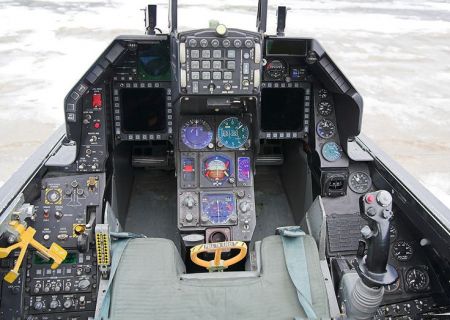 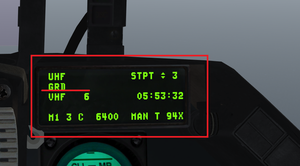 This pilot has UHF tuned to the GUARD frequency while VHF is set to preset 6.

The F-16 has two different radios:

VHF is used for intraflight communications. Each flight in the package will have their own VHF channel and associated frequency. While each pilot will know the frequencies and channels of the other flights in the same package, there are few reasons to use another flight's VHF frequency in a typical use-case scenario.

Note: One exception to the typical arrangements is with airbases that do not have UHF radios. Communication with those airbases must happen over VHF. Flights may use UHF for intraflight comms during those instances.

The pilot can switch between SQ and GUARD. A pilot doesn't need to fiddle with the GUARD frequency directly in order to transmit

GUARD is a specific frequency that is shared by all flights on the same side regardless of their package. Both UHF and VHF have their own separate GUARD frequency.

The F-16 has an additional UHF receiver. This second receiver lets the pilot monitor GUARD on UHF while still being on his primary UHF frequency. A pilot is able to hear Mayday calls, or other important information, over GUARD. Since no such additional receiver exists for VHF, the pilot must switch to GUARD manually on VHF to transmit or receive on the VHF GUARD frequency.

Transmitting on GUARD in any case requires the pilot to switch to GUARD manually, since there is only one UHF transmitter and one VHF transmitter. While a pilot could manually enter the frequency for GUARD into his primary UHF radio, the F-16 allows a fast-switch to GUARD with the use of switches located to the right of the throttle. SQ stands for Squelch, and GD stands for GUARD. SQ is the "normal" position. Moving the switch to "GD" allows receiving and transmitting on the GUARD frequency for that particular radio. When a radio has been switched to GUARD with this switch, the DED shows "GRD" instead of a numerical frequency or channel.

The F-16 has one backup UHF radio. If the VHF radio is damaged, there is nothing that can be done about this. The pilot will have to communicate over UHF.

The UHF radio selection panel is located on the back left panel under the pilot's elbow. Once the radio selection is changed from the UFC ("Upfront Controls") to the "Backup," control will shift from the UFC and DED to the backup radio panel located in front of the throttle. The pilot has the option of selecting GUARD, a channel preset, or a manually entered frequency. It is good practice to input a frequency into the backup radio settings before takeoff.

The addition of the Comms Ladder in 4.34 presents more organization to BMS comms, both when flying with humans as well as AI, but it also presents more complexity. Each airbase may have multiple frequencies; AWACS will be listening for calls on another frequency; and wingmen will be on yet an additional frequency -- all over two different radios.

To help the pilot manage the additional complexity, the ATO automatically creates and assigns a Comms Plan for each flight. This plan is a mapping of channel presets with the important frequencies that flight will probably need. Pilots will be able to switch to the required frequencies by simply switching channels instead of manually entering each frequency.

In order to see the Comms Plan, the pilot may view the briefing:

Warning: Failure to have the correct flight selected will open the wrong briefing. The ATO doesn't care where the pilot is seated; it cares which flight he somehow has last selected.

BMS is a communication heavy simulator. To accommodate this and its endeavours for realism, it has its own communication client called IVC (Internal Voice Comms). This system does not rely on any third party application such as Teamspeak, Ventrilo or Mumble as it is integrated into the client and game allowing for simulation of UHF and VHF Radios to communicate with other human players. This simulation takes such things into account as terrain masking and distance. To start IVC, you take the following steps:

In order to use IVC in the 2D UI, use [F1], [F2], and [F3]. These keybind are hardcoded into IVC and cannot be changed. They will NOT be used to communicate in the 3D world, and can be used for other in-game functions.

In order to use IVC in the 3D world, the BMS bindings are used:

Each pilot prior to committing to the 3D world should:

The Comms Plan must be loaded into the pilot's DTC (Data Cartridge) manually. This should be done as the last series of steps of a flight briefing. No further changes to the flight should occur.

Note: Failure to have the correct flight selected will load the wrong comms plan. The ATO doesn't care where the pilot is seated; it cares which flight he somehow has last selected.

After setting the correct Comms Plan, the default channels should be assigned in the DTC if needed.

UOAF SOP for default channels are as follows:

For UHF, "DEP Ground" is the ATC Ground frequency for the Airbase of Departure. This translates to the ground crew who run the base that the pilot will be starting in (unless spawning into a flight already in the air). This is always UHF 2. This is the channel required to request such things as clearance to taxi to the ramp, or to remove the chocks from his aircraft.

For VHF, the intra-flight channel is chosen automatically by the ATO based on the flight's order within the package. The first flight always gets VHF 15; the second flight always gets VHF 16; and so on with the fifth and last flight getting VHF 19. Failure to be on the correct channel will result in delays as the flight will try to find the "missing" pilot during flight check-in.

Note: Some operations may require different starting presets. These should be briefed by package lead prior to loading into the 3D world. Unless instructed otherwise by package or flight leads, follow the SOPs.

After the briefing for the mission is complete, there's usually an IVC check where all players sound off on IVC to confirm that everyone can transmit and receive without problems. The sequence is usually performed in the Flight order located in the Briefing page.

Each pilot will sound off by pressing [F1] and saying his callsign in sequence, such as "Falcon 1-1." If there are no humans in the next slot(s) in his flight, he should indicate that as well. For example, "Viper 1-3, no 4," would be a valid callout for someone in Viper 1-3 with an AI in the #4 slot.

Let's say we have four flights in the following briefing order:

To push to a new preset (ie. Change the channel) or manually tune to a new frequency:

Note: Alternatively, when the DED is at the CNI page (ie. the default page), and a radio preset is already selected, the pilot can cycle through to the next and previous preset by using the NEXT and PREV buttons on the ICP respectively.

To assign a new frequency to a preset: